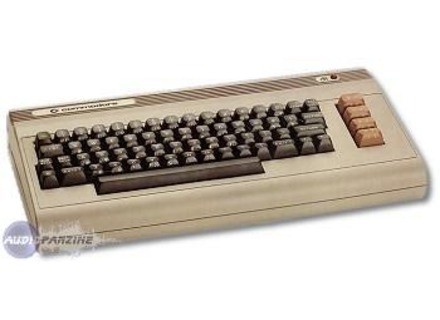 C64, Other Computer from Commodore.


1 user review
Find it in the classifieds starting at $40 Avg used price: $40

Ravage's review (This content has been automatically translated from French)

among plthore microcomputers "household" which came out in the 1980 beginners, this one has been most successful in Europe, especially thanks the its rich catalog of games and the fast with which budding pirates s'changeaient tapes and disks "cracker" by talented prodigies (in gnral the Rhine).

If dignified figure on AudioFanzine is because its "smart" voice a silent exceptional originality (one circuit function Fully ddi, long before his peers and Creative Labs do redcouvrent coprocessor with the concept of specially Soundblaster audio cards and other PC audio). It was a mini-dot 3-synthtiseur programmable channels, each with an oscillator "basic" to the gnrer DIFFERENT types of wave forms familiar to early synths analgogiques (square triangle, sawtooth, noise). The SID (his name for Sound Interface Device) was used then as the "real" synths of the era, to filter and modulate the basic shape for a rich sound "polyphonic" quasi -luxury on this machine primarily edutainment ducats.

The best hackers have russi grind this circuit into a synthtiseur voice-it is a feat with circuits running less than 2 mgahertz with 32 KB RAM dmmoire! - Basic controllable .

Nostalgia for soundtracks of the first games video anthology and dbarquement fashion "lo-fi" of the 2000s it pushed other wacky hackers CRER of PC emulators SID of the famous circuit, a VST plug-in of up modliser a weapon of tens of Commodore 64 playing in harmony! A symphony in honor of ancestor who made more natr begins CF career crosses paths between computers and music, long before we talk about "multimedia" ...

PS: The Commodore 64 is also known just as crazy hack in audio because it was one of the first computers offering software synthse sound, and the ancestor of squenceurs the famous " trackers "... Even today, a community of "trackers" crazy s'change format files to show that C64/SID Contents of "dmo" the software virtuosity, nothing beats a rudimentary tool or primitive. Of course, the musicians and srieux dsargents have done better to turn to the descendants of the C-64: The Commodore Amiga, much more "modern" and more usable software ddi dots s appropriate. The C64 today is primarily a pice of muse. A memory moving in the memory of those who had the 12-year era!

Other Commodore other Computers