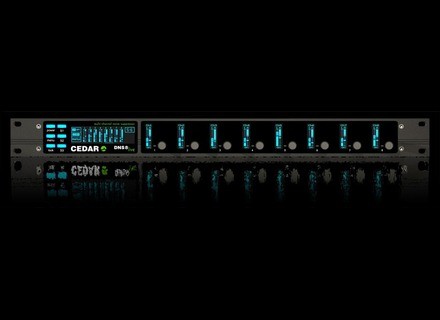 All user reviews for the CEDAR Audio DNS 8 Live

Buy this productView price information >
Not satisfied with those reviews?
Our members also liked:
Buy at Amazon

CEDAR Audio DNS 8 Live
This is the last of the denoiser CEDAR already well known brand in the world of post production processing.

The product comes in the form of a unit 19 "rack unit on a high with a sober facade in black matte aluminum finish. Few grooves machined in the mass adds a touch of nice design.

Shallow, you will find at the back of rack XLR 4 females and 4 males and an XLR jack to DB25 format. All these connectors only accept AES. Exit analog.

You can reference the machine is on the AES input or via the BNC connector that accepts the Word Clock and ... DARS (AES11 compliant).

Finally an RJ45 jack lets you connect the machine to a PC or a MAC for easier control. DNS 8 embeds web compatible with the most popular browsers interface.

First, keep in mind that the machine will do better with separate sources rather than a complete mix.

Indeed, the analysis focuses on the background, we must allow the machine to operate detection by deduction. This means that the machine will enjoy the moments when there is little or no dialogue to operate.

In our case, we provided him submix. In our application, which is that a tea talk show specifically provided in the background (projectors, giant video screens, projectors, air conditioning, fan Dyson (sic!), the machine was fed seven entries by groups of consoles which were divided into different lavalier HF (MKE40 on SK5212).

We initially used in automatic detection. This analysis does not last more than two seconds and produces no audio clipping.

From the analysis carried out, the results can be heard. The background noise is reduced by at least half. The timbre of the voice remains unchanged.

Similarly, the sound seems more colorful as the machine is also played on the reflections and possible this sound on the board.

However, beware of the effect of stamping die when a person carries a single microphone is not positioned in the center. The machine will tend to confuse useful modulation and noise ... extreme case fortunately. It should therefore not too remember the microphones before entering the machine and let it work.

We only used once ... live (it is the total eggs but you could easily passed by) and frankly it is conclusive. The result was found by people who do not necessarily have the "ear".

The plateau on which we tried was one of the loudest we met ... a real case study.

The processing time is almost zero, most importantly for the work to the image that is more direct.