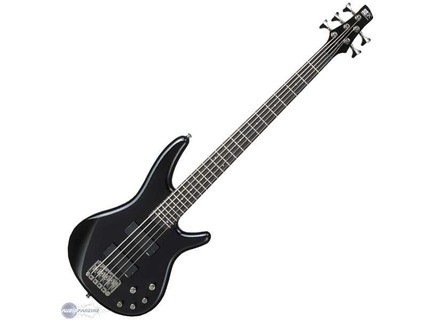 Ibanez SR405
4
I recieved the bass as a gift for my birthday, because I wanted a 5 string for extra range, to my knowlege it cost $799NZ.

The active controls are great for shaping a room filling sound that depending on your tastes can either blend in with a band or stand out in it's own sonic spectrum. The extra range is OK but I don't play anything lower than the low D because it doesn't really blend in with the other instruments, I have found the best sound and range out of this instrument is acheived by stringing it with D'addario flat wounds and tuning it in fifths from low to high 5=D 4=A 3=E 2=B 1=F# which gives you a range of 5 octaves and 4 semitones compared to the 4 octaves and 8 semitones of a standard tuned five and 4 octaves and 3 semitones of a four (all excluding harmonics), the low D is the equivalent of Drop D while the high F# is the equivalent of the 14th fret on the high E of a guitar.The input jack is solid as a rock and the battery seem to last for ages I've just changed my battery for the first time since march it is now august!

I didn't like the brightness of the instrument, it's good for popular music styles but doesn't have the depth required for jazz, blues, latin or reggae even with the bass control turned right up and the mids and treble rolled off. Also the tight string spacing makes slapping a lot harder, I don't have huge hands or anything like that even though standard slap pop techniques are easy enogh to pull off, I found whe you get into the serious slap stuff like double thumbing(like Victor Wooten) or double plucking (like Ray Reindeau) these advanced techniques require far too much concentration to do on this bass. A warwick thumb with wide spacing option is a billion time better than this bass for such playing.

The maple body is a touch on the heavy side for me but I put that down to me usually playing 4strings even though it is well balanced on the lap and on the strap.
When I opened the electronic cavity for the first time yesterday I was pleasantly surprised to find a fully sheilded compartment with foil and conductive paint, threaded screw inserts neatly placed electronics and a solid battery mount.
the three piece maple neck is quite comfortable even for small hands and shouldn't intimidate anyone, tuners are quite accurate and hold their pithch well.
The nut on my bass was properly cut and the action low with no string buzzes, whenever I get a new instrument I ussually set them up myself but on this bass there was no need I haven't even adjusted the neck. Just a well built bass.

If you are wanting to delve into 5 string land and are looking for a bass which is easy on the hands then this is probably a good bet. It has a good preamp but does't have all the sounds in there which is fine if you don't want to play jazz or latin. This bass is probably perfect for what I am doing with that is playing in a 4 piece rock band with two guitars to cut through also responds well to effects such as electroharmonix bassball, crybabby wah and boss turbo overdrive, alll in all a good bass at a good price but final thoughts a set of flatwound really makes this bass sound great and does add considerable depth I recommend D'addarios 45-130 chromes.

Ibanez SR405
5
I acquired the ibanez bass guitar by referreeing lacrosse games, I bought it Giovanni Yamaha Music in Edmonton, Alberta, Canada. As in walked into the store the resilient lacquer finish caught my eye I had originally been planning to be a Fender Jazz Bass, but was lured by the sheer unadulterated power and feel of this Bass Guitar. I bought the guitar for $750 Canadian

This Bass guitar has a neck with an amazing feel great for playing almost all styles of music. In addition, this five string is surprisingly great for a funkadelia and slap Bass which I am particular too. Similarly, the pickups give a great sound, and are active making agressive play, sound beautiful. The tone knobs give either a soft, soultry tone or a powerful abrasive sound. Also the playability of this guitar cannot be matched so for all you metalheads no need to worry about the inability to play quickly and powerful. The fretting on this guitar is great the frets higher give a hush hollow sound great for soloing.

The guitar has active pickups so it can be annoying to change the battery especially if you play often. Another dislike of mine on the topic of the SR405 is the cheap factory that are on the guitar when you buy it squeak like mice

The construction quality of this guitar is very good. Although the tuning pegs can be a little bit fussy. The input jack on this Bass is exquisite it will never fall out because it is but a hole in the guitar with nothing surrounding it.

If your playing in a band and want a professional level Bass for a reasonable price this is the Bass Guitar for you. It's maple neck rosewood fretboard, pearl dot inlays all make this Bass exquisite.This guitar is great for playing funk rock and metal because of its durability, playabilty and sheer power.

The 3 band eq is very nice because it makes it easy to change tone. The neck is pretty thin for a five string, but not too thin. The sound is very smooth (also a con). The natural finish looks very nice. It's cheap for a five string with active electronics.

The SR405 lacks any real growl (it's very "smooth"), depending on the style of music that you want to play. The strings that come with it arent great, but they certainly are adequate.

Very high quality, no problems with the construction whatsoever. Feels very solid. The knobs are really on there.

An excellent budget 5 string with many features found in higher priced basses. It is well constructed and sounds good, except it lacks a growl.

Ibanez SR405
5
After playing Ibanez basses for about 5yrs, it was natural to stay with them when I ventured out for a new toy. I purchased my SR205 for $520 at my local shop, and it was worth it.

First a foremost the tone is excellent, I've played around with almost all the top name basses in the $300 - $800 price range and this is if not one of the best.

Well my only complaint is that Ibanez needs to factor better strings, for 500+sumpter, I expected better stringing! But go out and get some Ernie Ball or your choice and your set/


If you setup to low B this mug can be crucial! Playing in my band I have to play hard and loud and try my best not to let the lead guitarist drown my sound....let's just say I love this bass. 2 octaves in every 5 frets of the 24 frets, maple body, 3 piece maple neck and rosewood finger, DX5 pickups and about 45mm at the nut...sweet!

It's light, well crafted, and can take a beating and still sound great! So for all you KoRn, Mudvayne, and Rage kids that toss things....this is a bass that can suffer such abuse!

This review was originally published on http://www.musicgearreview.com
Did you find this review helpful?yesno
»
Read the 8 user reviews on the Ibanez SR405 »