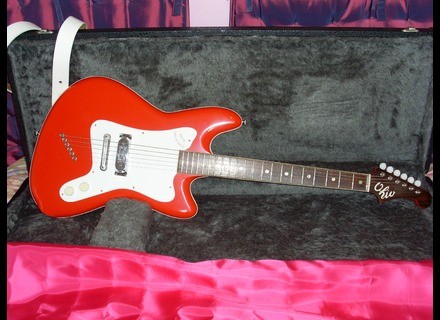 Ohio, Other Electric Guitar from Jacobacci.

salinas55's review"Finally, my own Jacobacci OHIO - just when I no longer even dared dream of it!"

Jacobacci Ohio
5
-Not long ago, after I gave an old pal a Fender Telecaster (bought in 74 but very well serviced), he decoded to return me the favour and allowed me to pick this one from a garage sale in southern France.

So, it was just pure chance and I’d lie if I said I was looking after that specific model, but then at first sight... and, it was only 40 bucks! Mind you, an “Ohio” ! The logo’s arabesque pattern on the head was almost erased with time, but that will only bring back memories to people from older generations!

-Of course, its appearance looked nothing like the above picture, but in order not to give a bad image of the model I picked a better pic on the web.

For a guitar aged 50+, it had of course suffered but I’ve seen worse. We restored it patiently but still hesitate between paint and lacquer – indeed its bolt-on neck is made of aluminium with an added fretboard (which we refretted, by the way). That’s curious, while it tends to dive to the front I didn’t expect such a playing comfort.

-This is not the sound signature of an exceptionally-built guitar though, but rather an irresistible sound signature and look to provide the classic style of the early 60s’ Franch and Italian bands.

It also has a “zero fret” and a stringthru architecture, with the bridge farther from the body - yet well in-tune up to the tuners. Let go of all your prejudices, metal won’t dilate and ages better than wood in any environment with temperatures ranging from 8 to 40°C – provided of course you keep it in a stable environment, but hey, do you really play that often up on a glacier or down in the desert?...

It features a volume and tone control for its single original pickup, which was in a terrible state: we’re currently trying to save it, though we are quite reserved as to its sound quality compared with the "S/Duncan/antiquity/bridge/dog ear'/P90" we've put in its place. The clean sound is neat, and the 8.5K provides an heavy output before getting into distortion territory.

- Goddamit! What a pleasant guitar, and what a great clean sound reminiscent of the 60s teens riding their customized mopeds while thinking they’re Marlon Brando on a Harley!

“But where the hell did they go find such an awesome design?” Well, a bit of Strat, a pinch of Jazzmaster, but in the end not much in common with their sounds. But to get back to what made the 60-63 era Italian and French rock scene so unique, use it with a Fender B/J/III and a fes additional effects such as an echo chamber (or more simply a Digitech multieffect pedal available for €50) to remain true to the original spirit. If you own a Vox, you can get a reasonable crunch sound in the “electrified delta blues” range, and you can get even more out of it.

For Beatlemania-like sounds, that’ll be easy, now you’re of course free to experiment with today’s gear which has little if anything in common with the prehistory of gears and effects the 60s were. So it can walk down easily on Rock’n roll’s daring streets of British Rock and Blues filled with the twisty sounds of the years 64 to 70 – a P90 knows how to crunch and overdrive with the right additives that will help reinforce its sustain which, while up to par with a Strat’s, doesn’t compare with a Les Paul.

But while it won’t stop here, please don’t push it over the edge of metal!

- A “made in France” Jacobacci brings up so many reminiscences of the emotions lives with this so-called “extra-thin” axe!
Let’s not forget its two creators, the late brothers who had the great idea to bring the US guitar style here and pioneered with their talent the accomplishment of the dreams of all the baby boom kids dreaming of Elvis and James Dean’s hip moves!!! (let’s also remember that their archtop/jazz models, sometimes offered under different names, were so appreciated that they sometimes were even preferred to the Gibson L5 and ES-335).

Since then, we’ve learnt how sought-after they are, and let’s insist on the fact that artists are NOT all ego-driven prima donnas, and many have remained true to this brand up to the early or mid-80s, with many who have regularly played with these guitars. Yes, sometimes thinking of the good ol'time is a safe refuge...
Did you find this review helpful?yesno
»

See all 75 photos of Jacobacci Ohio »