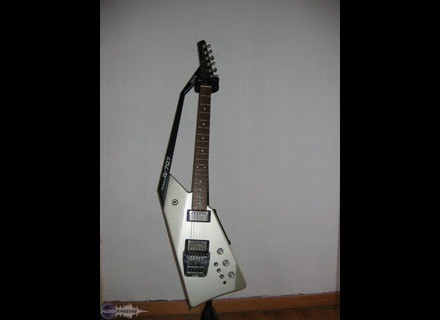 G-707, Other Electric Guitar from Roland.

Roland G-707
5
I LOVE this guitar and i love it even more because i got it for free! This guy i know is a big musician (bass and guitar) and was cleaning out a bunch of stuff that he had laying around and stumbled upon this old guitar he bought in the 80's because the Police used the exact same thing. He knew i was starting out so he just gave it to me! He was going to sell it but decided i could really use it so he gave it and the synth unit to me for absolutely nothing.

Where to start? This guitar is quite simply one of the best guitars i have ever played. I can achieve many different sounds just by making simple adjustments with the knobs and turny things. Now, the looks of it may seem a little funny, it gets a little bit of ridicule, but once i plug it in it really blows people away. The reaction is just that much better because of how ridiculous it looks to some people. NEVER JUDGE A BOOK BY THE COVER. I also love the synth unit that came with it. You get a whole lot of cheesy 80's new wave sounds and some that i have actually found pretty useful. If nothing else it is just cool to play with when you get bored. The neck on this guitar is one of the best feeling necks i have ever played. At least it suits me just perfect, nice and slim, easy to move around on, really fast action.

What i don't like? Well.... sometimes i get a little crazy and wish i had more of a screamin' strat sound. I can come pretty close but not quite. It's okay though because Strats are completely over rated

It feels way better than a Strat anyway and sounds better, I think.

When i got this i was informed that it had taken a few beatings, and i know it has from me, and it still holds up. Nothing is broken at all, nothing loose, nothing missing, just a couple tiny chips that you could find on any guitar. I am not completely sure what type of wood it is made of, there really isn't a lot of information on this guitar out there on the net. However it is VERY sturdy, which is good because i am VERY clumbsy.

Great guitar, easy to play, feels great, sounds great, what more could you ask for?

jmlesaux's review (This content has been automatically translated from French)" Legend!"

I do not use it anymore because purchase GR50
The ability to modify the sound live from the guitar or the volume pedal Roland.

the handle 22 frets fine is not a monster but still nice speed end and round at the back
to play ... is on the quality feel and good access in spite of acute bolt-on neck

the versatility of sounds is huge
you can do almost anything avec.mais big big sound metal will be harder to find.

since 1986
yes
the look of the space and the stability of the whole
very expensive at the time
I probably do it again this choice without this budget there
Did you find this review helpful?yesno
»