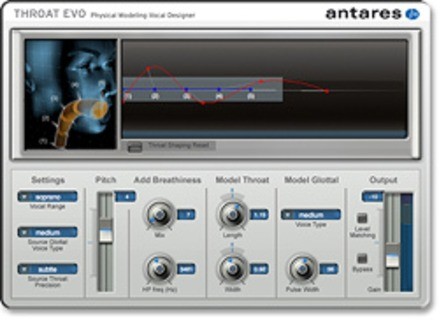 All user reviews for the Antares Audio Technology Avox Throat

Antares Audio Technology Avox Throat
4
Antares Systems' Avox Throat is a unique plug-in that is part of Antares Systems' Avox Toolkit for vocal processing. This one is unique because it aims to give you control over the inner workings of the human voice. Installing the plug-in and the full bundle was really simple as it was nothing out of the ordinary when compared to installing other plug-ins and software. The interface of the plug-in is definitely the most in depth out of the AVOX plug-ins, consisting of a series of sliders for controlling your sound. At the top of the interface is a graph and picture of the throat to show it's movement coming out of a human. The parameters that it has to work with to start are for setting your vocal range and type as well for choosing the source throat mode. It then has slider parameters for adding 'breathiness' and for further shaping the sound of the voice. It's pretty in depth, but after playing around with the plug-in for a couple of days I was able to get a pretty good grasp on what it can and cannot do. A manual might be a good idea if you're feeling confused, but I haven't seen it so I can't speak to it's make up.

The system that I'm running the Antares Systems Avox Throat plug-in on is Pro Tools LE based, and the version of Pro Tools that I'm running is version 8. I'm running the software on my Mac Book Pro lap top computer that has 4 GB of RAM and a 2.2 Ghz Intel Core 2 Duo processor. I run Pro Tools with a Digi 002R and I listen to everything with Adam A7 studio monitors. I've only ever had a need to run a single instance of this plug-in at a time, and I would imagine that this would be the case for most other users out there as well. Keeping this in mind, I've never had any performance issues with this plug-in, but I can't say what it would be like if I wanted to run more of them at a time (which would seem unnecessary anyway).

The Antares Systems Avox Throat is a really awesome idea and a fun plug-in to play around, but to date I've only printed a track with it once. It definitely has some potential and perhaps I've yet to unlock it, but often it sounds too processed to me when I run a voice through it. The aspect that I like most about it is that it is pretty good at adding a bit of high end via the 'breathiness' section. This is really just a specified equalizer, but it does make it easy to add color here or there to a voice. Personally I'll continue to stick with more traditional equalization, but there are definitely some cool things that can be done with this plug-in.
View price information
Did you find this review helpful?yesno
Cookies help us improve performance, enhance user experience and deliver our services. By using our services, you agree to our use of cookies. Find out more.