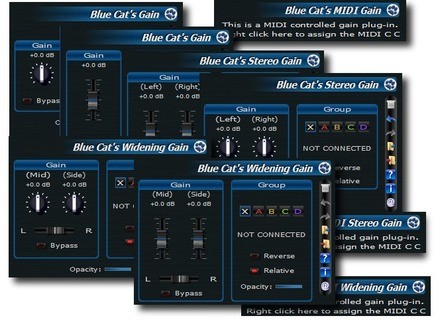 Blue Cat Audio Blue Cat's Gain Suite [freeware]
4
Blue Cat Audio's Gain Suite is a series of free simple plug-ins for a variety of different formats. It's available for both Mac and PC operating systems, and in pretty much any plug-in format I can think of, including RTAS, VST, and all the other majors. Included in the Gain Suite is three different plug-ins including Blue Cat's Gain, Blue Cat's Stereo Gain, and Blue Cat's Widening Gain. You can link them up if you want to use more than one at once, which is a pretty cool feature. Each also has a few different skins to choose from in terms of visuals. The process of downloading and installing the plug-ins was quick and simple, as you can access them directly from Blue Cat Audio's website. Using these plug-ins couldn't be any easier as they are just for gain up or down, kind of like Pro Tools' trim plug-in, but a bit more in depth. No manual is necessary for use with these plug-ins, nor do I know if they even make one.

Right now I'm running Blue Cat Audio's Gain Suite in Pro Tools LE 8 and on a Mac Book Pro lap top. The computer has a 2.2 Ghz Intel Core 2 Duo processor and 4 GB of RAM, while I'm running Pro Tools with a Digi 002R audio interface and monitoring with a set of Adam A7's. These plug-ins take up such a small amount of processing power, that the vast majority of users won't have anything to worry about. If you think you're on the fence you might as well try them out since they're free anyway.

While maybe not the most illustrious plug-in suite, Blue Cat Audio's Gain Suite is a free bundle of useful plug-ins nonetheless. They're perfect for use when you don't want to have your DAW's automation going, as you can automate outside of it with these. Blue Cat has a bunch of free plug-ins that are definitely worth snatching up and I'd encourage you to head over to their site and do it now!