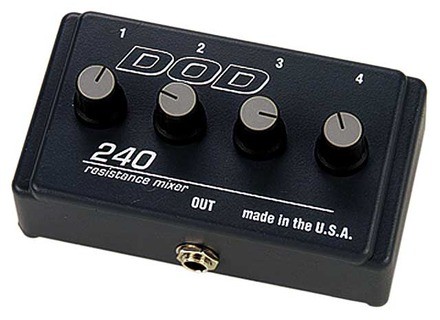 DOD 240 Resistance Mixer
The DOD AC240 is a passive four channel mixer in a box the size of a direct box. It has a single ¼ inch output and has four ¼ inch inputs. It also has the ability to be used in the opposite way if you wanted to use it as a four way splitter. This is really all there is to this box as it is as simple to use as its connections are. Simply plug any signals you might choose into the inputs of the mixer and it will give you the ability to send them all to a single channel. I’ve never had any troubles using this thing at all and since its in a pretty sturdy casing, the one I use has never gotten broken. I don’t use this everyday, but its nice to have it around for whenever I might need something like this. It won’t change the sound of your signals beyond the fact you are sending four signals into a single one and you won’t get the same effect as if each were its own mono channel. There isn’t too much more to say beyond this as it isn’t designed to change or effect your signal, its simply a mixer. Altogether, I’ve been using the DOD AC240 for around two years and while it isn’t the most important piece of gear that I’ve ever used, it certainly comes in handy here and there and is nice to have around. The price is extremely cheap which makes it more of a no brainer to have around. This isn’t something that is essential to anyone’s studio, but if you do a lot of large groups and need to occasionally split headphone mixes and things like that, this is a good piece of gear to have. If you need a cheap four channel mixer, the DOD AC240 is just as good as any.

DOD 240 Resistance Mixer
3
I use it occasionally for 14 years.
can connect up to 4 instruments on an amp.
some microphones do not pass and the sound is too attenuated to an input sound.
great to share an amp.
there is an attenuator on each input jack for balanced sound overall.