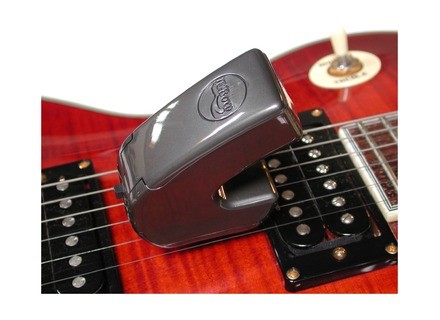 E Bow Plus, Other Guitar Accessory from E Bow.

Value For Money : Poor
View other reviews for this product:
The E + bow is the new version of the old E bow (bow electronic) which shall adopt production was in 1999. For those who do not know this device cr magntique field over the rope that will vibrate Crant an effect violoning with endless sustain .. yay.

Its functionality is simple: A 3-position switch Ebow / off / Ebow-harmonic. As against its use is somewhat Drout to departure. But then it lets you do a lot of sounds when you get enough INTERESTED well use it.

Report qualitprix is ​​the least of the product: as everyone agrees to say it plutt expensive for what it is. I bought it for just over 100 the era. But I think it's not too bad all over. Plutt spy picture that I have been .. on my wooden coffee table, was class eh?
Most is you can do a mulititudes sound depending on how it is used. Everything explained in the instructions are in English of course (but you still work the same bte to get there). This is an original accessory.

I would do this choice to the extent I use it fairly regularly. However, it should perhaps not be for everyone. Let me explain, it is a device designed to do a lot of effects like violoning and its use as I said above is not really empty ds beginners. Clearly it is impossible to re-create what the guy on the tape provided unless you really work this thing and the dlaisser mdiator.

So if that's what kind of effects you want to incorporate your game, or you want to drop the mdiator, I'd say it's a good investment. on the other hand, if an accessory you just want to try because, well, you never heard the sound of something or want to toy once or twice, take it to a friend. Note that you can activate only one rope once.

A tip before you buy, see what has given the seller. I would put even when a note ..
See the source
Did you find this review helpful?yesno
Cookies help us improve performance, enhance user experience and deliver our services. By using our services, you agree to our use of cookies. Find out more.