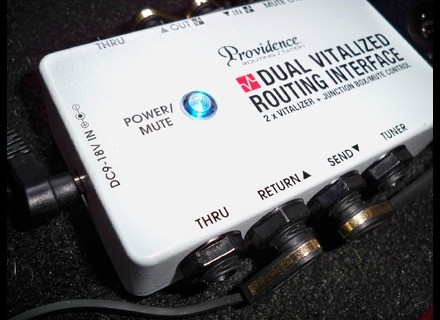 DVI-1M, Other Guitar Accessory from Providence.

All user reviews for the Providence DVI-1M

Providence DVI-1M
5
SOUND:
The DVI-1M, or the Dual Vitalized Routing Interface, is a buffering system that makes a difference in tone quality and clarity even with a very basic set-up. For example, I use the Line 6 Relay G10S wireless system, which I find produces a clearer tone than even some high quality cables I have at my home studio. This goes into the DVI-1M that goes out to the AMP1 Iridium and BluBox (a speaker IR) – both units by BluGuitar. Now, something to consider about the AMP1 Iridium and BluBox is that they not only are of high quality in tone production, but the AMP1’s solid state power amp is very clear and cuts through the mix without issue. Nonetheless, the result was a tighter and more defined grain in overdriven tones when adding the DVI-1M. Improved clarity and character also was obvious when adding a wah, external overdrive and some modulation effects in the DVI-1M’s FX Loop (Send/Return); but what stood out even more how pronounced the effects were. For instance, the modulation effects sounded as though a filter was turned up to improve their ‘vocal’ range. All these are demonstrated in the accompanying video that comes through decently with YouTube’s compression, but is more apparent live in the room.

GENERAL USE:
The DVI-1M (Dual Vitalized Routing Interface) is a dual-circuit buffering system (a Vitalizer circuit in the In/Out and at the Send/Return of the unit). It is super-easy to use since the only required operation, after an initial hook-up is the Mute switch. When the unit is powered up (via battery or standard 9VDC or 18VDC adapter) its LED is blue; and when Muted the LED flashes red. Hooking up the DVI-1M ranges from simple to complex, depending on what gear you’re using. A simple hook-up could be nothing more than an amplifier with a few effects, whereas an advanced hook-up could involve a programmable effects controller, a MIDI controller or a two-amp + PA connection. The demo below includes an overview of the DVI-1M, my sample pedalboard layout with sound samples, but also various possible hook-up scenarios (images extracted from the user manual). The Mute function comes in handy when tuning (the DVI-1M has a separate Tuner out that can be switched over to a third parallel out), when switching guitars during a set or even as a kill-switch for special ‘stuttering’ effects.

OVERALL IMPRESSION:
The DVI-1M is extremely flexible and brings to life your pedals and amps. Its popless Mute control is great for tuning, changing guitars, etc., but which doubles as a kill-switch… for that rapid stutter effect. Priced at $180 USD, it comes at a cost of a typical guitar pedal, but serves to optimize tone incredibly well, even with short cables and a handful of pedals. Think of it as improving the amps and pedals you already own and love. With more complex hookups the benefit of having the DVI-1M becomes more obvious. The two custom Japanese buffer circuits (Vitalizers) in the DVI-1M works to eliminate signal loss and noise by converting high impedance signals that degrade your sound and tone. Degradation occurs from many signal contacts (such as jacks, plugs and switches) to using long cables (most obvious once cables exceed 10-feet); the DVI-1M eliminates degrading noise and accounts or loss of high frequencies. In essence, those Vitalizer circuits are ‘active impedance converters,’ preserving your gear’s true tone while reducing ‘active sound’ or noise that come from your gear and all its connections, cables, etc. Because the DMI-1M is a separate and specialized buffering system, it is more effective and advanced than buffering circuits found in pedals. I have wah pedals with built-in buffers and the DVI-1M still produced an improvement in tone and growl.

Measuring 110mm(W) × 60mm (D) × 30mm (H) or 3.54 (W) x 4.72 (D) x 1.97 (H) inches this is a solid built device. With a white/cream aluminum chassis and black screen graphics, the convex LED remains blue and lit when on, although flashing when on and Muted. There are no footswitches or knobs, whereas the Mute function is controlled by a third-party latch/footswitch. The underside of the DVI-1M includes rubber feet (glued on and not screwed). All the input and output connectors are of excellent quality and tight. The DVI-1M operates on a standard 9VDC battery (included) or a 9VDC or 18VDC standard power supply (negative tip).