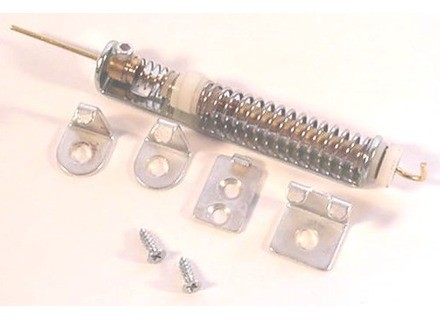 Fender Tremsetter
1
On Youtube videos is rather enticing.
A magical object that catches up the defects of a vibrato, ie which does not tune non bendées ratings when making a bend on a rope, which does not make the guitar unusable if a string breaks (for bridges floating.) the idea is very good, I would say excellent. But why manufacturers do not put on an office instead of a spring if it is so good? I understand, because it is as an object Piper ...

Well, I feel that I will incur the wrath of those who are satisfied. The assembly is not easy, it requires holes in the cavity springs vibrato, but the French tutorial found in section Audiofanzine media is very well done. Where it's gate is how to fix it.

It is presented as almost universal, but in a Godin Progression, the diameter of the rod that will fit into the sustain block is a bit too big, I had to grind and get a little stronger.

I did the first test, blah, I do not really see what it brings ... The tremsetter moves on the leg that is screwed into the cavity when pulled up on the vibrato to the note, is this normal? When I bende, vibrato still raises ...

Wanting to disassemble to try to understand how it works, the rod broke and a piece remained stuck in the hole of the sustain block ... bingo! For me it is a bad experience with this subject ...

The ideal object, in my opinion would not be impossible to achieve, is a floating bridge that hangs completely when the tremolo is not inserted.

Other Fender other Guitar Replacement Parts