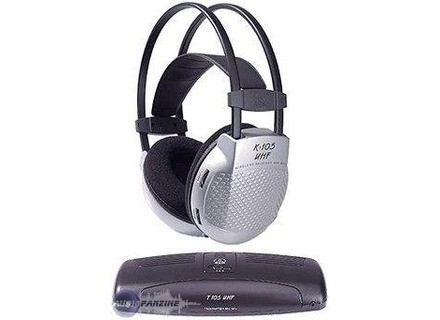 blacknight's review (This content has been automatically translated from French)

AKG K 105 UHF
1
Bought 2 weeks ago for 79 .- CHF (Swiss francs), approx. 50 Euro.
Used an hour before returning to the store.
Unusable in my opinion, the background noise is very important and the tuning of the radio frequency far too imprecise. It moves one to two meters and must re-tuner frequency.
Acaht so bad, that I regretted relatively quickly.
Even to hear the tv is not usable, because the background noise.

I WILL HIGHLY RECOMMENDED. It is better to save for a numerical model, it will be free from background noise.
Did you find this review helpful?yesno
»

Poet's review (This content has been automatically translated from French)

AKG K 105 UHF
1
Helmet used 2 times, one to test for a recording radio and a music system on
The shape of the headphone is nice, and it is not too heavy despite two batteries that embeds.

THE BIG problem is BREATH !!!!!
Initially, I thought that the issuer was a problem, but even with the volume off on the headphone, the headphone produces blast and noise. Listening to music becomes impossible as you focus to look for abnormal noises !!!!! And make a recording in another room having the headphone on his head is simply atrocious between "bzzzzzzzzz" and "wwwwiiiiii!"! It's like being back in the days of the TSF.

I should have read the opinion of the AFien following before you buy. I'm going to like him, and bring not this the point of sale!!

M J (01/11/2004)
New problem, but this time mentioned in the booklet on the line out of my equipment, the headphone is sometimes compression when the signal is too high.
By the way ....... I have reported.
Did you find this review helpful?yesno
»

Barbatek's review (This content has been automatically translated from French)

AKG K 105 UHF
1
Fully agree with the other two opinions ... This is just one cask shit and I'm not even dare to coment you can sell such chise.
J'espre me that they will resume in gooddeal ...
Ciao to all and do not buy surtou pass !!!!! huhu
Did you find this review helpful?yesno
»

toufik0001's review (This content has been automatically translated from French)

AKG K 105 UHF
1
Trsdu like everyone else, I did not know Audiofanzine. I ignored the advice of a magazine and it's a disaster. I do not have time to ragi me a refund.

So I trsdu. I do not know if wireless technology is developing at least I'm on track to buy a new headphone (TFW well sony MDR-XD400)
Did you find this review helpful?yesno
»