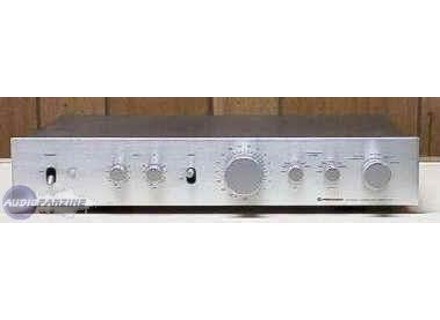 C-21, Other Hi-Fi Product from Pioneer.

centurygold's review (This content has been automatically translated from French)

Pioneer C-21
5
J uses the material for the past one year. this preamplifier have trivial is actually part of the three best machines produced by pioneer and remains a reference in the world. Made from discrete high-flown and built entirely by hand based transistors for UHF original mitsubishi (audio editing!) Is equipped with metal film resistors very expensive to very stable low noise in the form of small capacitors brown. It was designed by the chief engineer who was working with JBL. The famous series HPM 150 and another is from the series and all 20 did pioneer.Acun compromise was made to "this little preamp" The volume resistance is switched, the contacts are palladium switches wear out, mine in 1975 all the cells of the market moving coil or moving magnet can there be power adaptées.L it deserves a visit. It is symmetrical, but uses a diode bridge with a voltage as well as the first two filtering capacitors 470 uf/63v by "half power" then the whole is regulated by zener power transistor and then filtered again by 4 by capacitors 1000UF Half tensions we obtain by this means a very low series resistance and we can consider that this diet works like a battery.
The listening to this biased Class A preamplifier is amazing and no breath
its transparency, softness of restitution and the dynamics are incredible.
The commercial success of this product did not have to be large (even in the high-end) in FRANCE for it nor was certainly not enough buttons on it and functions. Presentation of a simple "small element fi" cheap either did not plead in its favor. For me it controls a large mcintosh
MC352 AND JBL Century Gold of them are more recent and yet there is nothing beyond n the contrary it is out of competition.
The only flaw I notice in the form c is not owning a headphone jack and
of a second output for a second controlled stereo power amp for example.
Since it is part of the material except far fads and aggressive marketing of certain brands to dream GOGOS the score of 10 for this type of material unknown to the new designers who swear by remote controls and microprocessors and displays totally useless on this type of material aimed
is to reproduce music and c is!
CJR

Other Pioneer other Hi-Fi Products