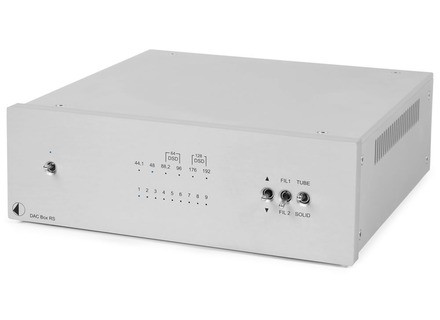 Pro-ject DAC Box RS
4
It is difficult to speak of a DAC. Even when it is not for us.

I give you a quick little review of the data sheet:
• Double top grade PCM-1792 D / A chip from Texas Instruments


We note that the gear is not hype by the presence of a dual DAC, almost anything found in the entry level and gradually abandoned by its competitors. Which reduces background noise and increase dynamic restitution.

It is seen also adding a small bonus esoteric ..., as the presence of a tube located in the signal conversion. The tube is detachable or shiftable through the switches on the front panel, which, as for the cd player, selectors are small mesa-boogie very nice to grip.

Connectivity is standard. It is outside the traditional craft with usb input, coax and optical out that will double or symmetrical double cinch.

I find any casing but welcomed the presence of real metal on it. However, I would have appreciated more generous dimensions and a real choice of colors (black or gray metal lousy choice).

Tones:
I found the outset, the sound produced by the dac (which then reproduced the sound of the CD player CD Box RS, all plugged into a pre Rowen Absolute and a pair of powered speakers Rowen A12) pretty good. Too bad the rest of the set spoiled restitution. Because by trying on various investments and config / parts, I noticed an ability to restore an already very detailed and very thorough without becoming delusional analitismo sound. The highs are his weak point I think, with a little less beautiful than anywhere else on this plan, but without twisting. The excellent Weiss DAC or DAC Accuphase at very lonely at the top in this field, but the medium was well restored with a small organic touch and bass spectrum that I would call "correct" without reaching the tenors in the field but not really get out negatively either.

A real criticism however, was the presence of tubes in the DAC, which, when they were in the signal, you were eating the bass, the detail and treble. Cool

After some enjoy the "tube" button precisely because of its resemblance to the behavior of a class A amp rendering was very clear in this regard, but without the normally remarkable immediacy in the medium. It may be something that some seek. But not me.

I would have liked us to invest a little more money in other parts of the conversion rather than grafting a gimmick tube esoteric (but hey, it takes at least that to get noticed in the very market Conservative fans hifi).

So overall, in my opinion, the tubes were mostly extinguished.


Otherwise, I enjoyed the ease of handling, with switch something which simply and LEDs that tell you where you are. As well as full connectivity.

I think the Pro-Ject DAC Box RS as a good DAC generally regretting, just that it would have been better if it had been given more time in the right places.
Did you find this review helpful?yesno
»

Other Pro-ject other Hi-Fi Products