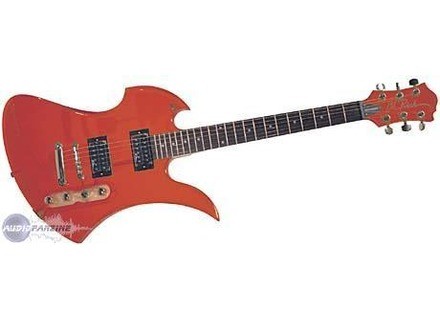 Acrylic Mockingbird, Other Shape Guitar from B.C. Rich in the Mockingbird series.

I like the look, its what sold me. The sound and tone are exellent. It isn't to hard to maintane.

I dislike the weight, its way too heavy, I can only play for two hours then my shoulder gets sore. The switch for the pick-ups went but the guys at mothers fixed it.

The quality is okay, they could have thought of a way to make it lighter.

I think it is a good guitar and would recommened bying on, probaly as a second guitar, because its so heavy you might want a lighter one.

B.C. Rich Acrylic Mockingbird
3
I bought this guitar for about $250 at Guitar Center, for half off the normal price of $500.

This axe looks and sounds amazing. The fact that it is transparent green makes up for a lot of its problems. The double humbuckers are nice-- hope to get a Seymour Duncan Invader replacement soon, but the way they sound now blows away my cheap old Affinity Strat. As my second solid-body electric in two years of playing, it is great!

There are three problems with this beast. First, it is HEAVY. My wrist aches after a straight half-hour of playing. Secondly, it contains extremely cheap hardware. Third, most retail stores do not carry the case that fits it!

The biggest problem with this guitar is the low-quality construction. B.C. Rich probably decided they could put crappy parts in a cool-looking guitar, sell it to unsuspecting 15-year old guys, and get away with it. I had the guitar for less then a month, when the strap on my gig bag broke, and the guitar hit the ground, snapping the headstock almost clean off the neck. Luckily, B.C. Rich was very helpful, and they sent me a new neck in a few days, free of charge. However, when I replaced the tuning pegs, and went to re-attach the neck to the guitar, most of the screws snapped in half! They were all made of galvanized aluminum. I replaced the screws with steel ones, and the guitar was fine for a while. Then, during a gig, it stopped working again. I pulled apart the input jack, and found that the wires (which had been glued, not sautered on) had snapped off. I ended up replacing the jack for $17, and am currently waiting for the next problem to occur.

Bottom Line: Buy this guitar if you have patience, time, and money. It also helps to have a decent knowledge of how guitars work, because you'll need to repair it frequently. If you don't have time, patience, money or know-how, this guitar is better left sitting and looking very pretty on a shelf then being used in serious gigs. Don't be fooled by its weight and gnarly looks; it may as well be made of glass.

This guitar has sustain for miles, even with a bolt on neck- no doubt due to the weight of the body. Mine is green acrylic, the color of green antifreeze. Looks great, especially in ultraviolet light!

Heavy as all getout! But if you have a strong upper body, its well worth its weight for the sound and the looks! Use a wide strap for more comfortable support.

Great guitar, I think I got a serious bang for my bucks. I ordered it as a party guitar because of its looks, and found it to be one of the best sounding in my collection. Its true that the acrylic body is heavy as hell, but the sustain and throw from this thing is massive as a result and more than makes up for it! Havent had it long enough to find out how it holds up to scratches. Shes a looker, thats for sure-