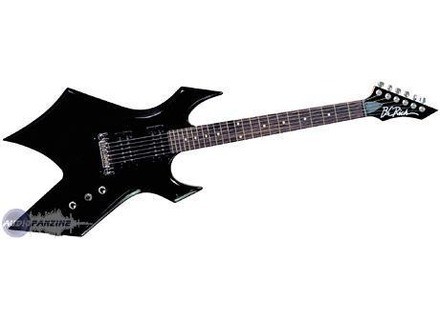 Bronze Warlock, Other Shape Guitar from B.C. Rich in the Warlock series.

B.C. Rich Bronze Warlock
2
I play in a cover band which covers all music from country all the way to death metal.

Bought from Guitar Center roughly 3 years ago for $215 after tax.

To be honest, there isnt much to like about it, i liked the feel of the neck, and it used to stay in tune when I first bought it, dont know what happened, but i doesn't stay in tune very well anymore.

The pickups are very poor quality, sounded decent when i first bought the beast, but after about a year and a half, its jsut liek they wore out or something, terrible quality, now they are much to muddy, and I have since sold them for 5 bucks to my buddy and put some older Dimarzio's in that I had laying around. Now, it sounds great, jsut wish it stayed ni tune.

Quality, sub-par I would say, I didnt think it was very great, at first it was OK, but it declined over time pretty rapidly. Made of some sort of cheap wood, dents very easily and finish is easy to chip off. I use this as a backup to my Fender strat, I'm suprised it's even lasting as a backup. Would never use as a primary.

Bottom line, a cheapy for sure, I wish I would have went with a cheap Epiphone or Squier, maybe even Ibanez, but my point is, you can get better stuff even in this price range.

B.C. Rich Bronze Warlock
5
Staight up Metal, with a wide range of varieties. Been playing for about four years now, and in a band.

Got mine in black from Musician's friend two years ago for about $150.

This thing is built like a tank. I have had for a fairly long time now, and I have never had a problem with it what so ever. Except for the occasinal string breaking. It is one of the sickest shapes for a guitar.

I don't like the strings and pickups it came with. So I put new strings on it, but I have yet to get new pickups. The pickups give good meaty tone, but not very good harmonics. The balance is a little off too, the neck is heavier than the body. It's also pretty heavy, but you get used to it.

I can not destroy this guitar, like I said it's built like a tank. I drag it every where and nothing has gone wrong. I do have to sa for such a cheap guitar, it has some pretty good craftmanship put into it. Even though it does't have the widow headstock like most BC Richs, it has the classic pointy straight six.

A great beginners guitar, and possibly for more advanced players, with better pickups. I think this is a must have for any metal head just staring out, and looking for a wicked axe to start dishing out some heavy riffs with.

B.C. Rich Bronze Warlock
3
i got this in a package for around 300 pounds.ut it can vome cheaper.

I enjoy playing classic rock but people say you cant play 'real classic rock' with this and threy are right in places.But if your playin maiden etc u get a great distorted soound and at band rehersals i play through a laney half stack and it sounds greatt hrough a DS-1.

The clean sound could be better and if you buy this DO NOT get the 'widow' headstock as your 3rd and 4th strings dont have enough support to keep them in tune.

B.C. Rich Bronze Warlock
5
bought from spectresound.co.uk, after someone kindly told me " you can't play metal with a cream strat mate" i think i paid £189 plus £10 p+p about a year ago now

action is lovely and low, stays in tune pretty well. The pick-ups are pretty decent, iv used it on stage a number of times despite many people opinions of it not being gig worthy and its been great. I got the version with the widow head stock which is great because i was expecting the 6 in a row head stock. Some people on here have complained that its quite heavy i dont think it is, it does feel very stirdy an i hav battered the poor thing an its come away with only minor scars an chips out of the points on the head stock. The bridge can make it a little difficult to restring but the bridge makes it great to do palm muting so as they say swings and round abouts... i think thats what they say anyway!

A whammy might be good but i wouldn't use it so i'm not gonna knock marks off. See above for slight restringing problems but not a huge problem.

very solid in construction, feels like you could take a hammer to it and the hammer would come off worse, no really! Deffinately no complaints.

a great guitar, i think its under priced... its gigable and of very high quality... if you are a metal fan an need a quality metal guitar this is it! Just another point, don't be put off by the fact Mick Thompson uses one, i don't mind slipknot but am not a masive fan, but Max Cavalera of sepultura/soulfly who is a hero of mine used a warlock for many years, so it isn't just a slipknot guitar... honest!

This review was originally published on http://www.musicgearreview.com
Did you find this review helpful?yesno
»
Read the 40 user reviews on the B.C. Rich Bronze Warlock »