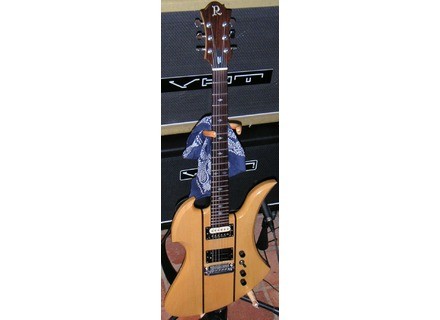 B.C. Rich NJ Mockingbird (1988)
5
I paid 200 bucks plus tax from Guitar center in Lynnwood, Washington. The reason I bought it was because it had a Floyd rose tremelo, and it was 200 bucks

FAST: This thing plays faster than you can imagine. XJ Frets let you play with a quick tap
SOUND: It has a tone you couldnt imagine not being custom, gives fat cruch on the bottom end and a screeching high range too. 24 frets let you reach notes higher than you imagine. Sustain will last longer than your hearing aide. The pickups do what you want them to, from a light BB King tune, to a heavy Kirk Hammett solo.
WEIGHT: Not the lightest guitar, but I like the balance of the guitar. It rests the neck gently in your hand so you can move from note to note quickly.

Well there is the weight, it is fairly heavy for a stage axe, the high E string is hard to reach when you are stretching for the 24th fret.

BEST GUITAR I EVER OWNED. Great guitar, sound, tone, quality, sustain, looks, this guitar has it all.

B.C. Rich NJ Mockingbird (1988)
5
I purchased this guitar at a local dealer of B. C. Rich guitars, they are very friendly and their are many great looking guitars. I bought it with money- I belive that covers...how. I paid $750 including tax and everything. THis was the basic ebony color and a floyd rose tremelo system.

The tremelo unit is worth at least 500$! It is sooo worth it if you use your whammy bar for solos, tough bends, etc. This is worth the guitar already! Furthermore, there are the lock tuners which mack tuning way easier! What they basically do is lock your strings in tune after you have already tuned them! Lastly, the c-slim neck is perfect for those of you who want to extend your fingers across the fret with ease! AS far as the actuall guitar sound..It is amazing. It is actually a very very good distortion guitar for disturbed, slayer, manson, etc. Plus, it is very Santana -ish! I use it for bluesy pedals and the WAH! Oh the WAH is amazing. However, it has the most amazing clean sound! Very well played. Basically, it is a pedal guitar...which means it will make any pedal sound awesome!

Well, the setup is strenuous. It will take you about 1 hour to fully set up your guitar. Yet, once you set it up to your custom fit, you will never have to mess wit it again.

4- bolt neck. C-slim neck. Tune lockers. Floyd rose. The construction features are enless, and the quality is superb. The only downside(Well inconvenience) about the guitars c- slim neck is the e and E strings are close to the edges of the fret board. This is NOT A PROBLEM for me and many becuase I pull the thicker E upwards and the bottom e downwards.

Pm.'s review (This content has been automatically translated from French)

B.C. Rich NJ Mockingbird (1988)
5
A little history to start for BC Rich is a little jungle in the models, names, place of production and so on.
After various research contacts with BC Rich I think I discovered, almost certain the identity of my Mockingbird!
So it&#39;s a BC Rich "BC Rico" Mockingbird NJ Series made in Japan assembled in California.
The letter "R" preceding the serial number, can establish on the site it&#39;s a BC Rich NJ Series which means Nagoya Japan (and not New Jersey, the company "Class Axe" is the important based in New Jersey it could be confusing). The first 2 numbers indicate year of manufacture, 88 in my case, so for the 1988 model year.
The NJ Series were manufactured in Japan and assembled in California from 1987, mine is from 1988 she entered this category of Japanese assembled in the USA.
And apparently not all BC Rich USA are "BC Rico" Rico is the name of the creator: Bernardo Chavez Rico ( https://www.bcrich.com/customshop/history.asp ) . Indeed there is the logo "R" the same as the BC Rich U.S. on the head and the mechanical.

Here are my sources: <p class="bbcode-cite"> % $ 1 <span>Import&#39;s</span> written <span>Guitar Lines - BC Rico
The import guitar lines started around 1978. They Were Called a BC Rico. It Is unknown Exactly How Many of These Were Made Actually, There Appears to Be objective Many More Than Previously though. The BC Rico Guitars Were Made in Japan.
FOLLOWING thesis Earlier Japanese made ​​guitars Were Another line of imports Which Were the first of the NJ series. Thesis Were A high quality guitars and featured the "RXXXXXX" serial.
By 1983 the NJ serials Were in full production making electrics, acoustics, hollow body semi acoustics and electric / acoustics. The serial number IS a sticker Usually on the back of the headstock. Have a thesis consisting of guitars serial number line with the first Two numbers Being the year. Eg: "R83XXXX" Will Be Made in 1983. "R86XXXX" Will Be Made in 1986.</span> <p class="bbcode-cite"> % $ 1 wrote his <span>1987: The NJ Series (ST, Mockingbird, Bich, Warlock and Ironbird) Which Were built in Japan and assembled in California.</span>

Electronics: 2 BC Rich humbuckers, a 3-position selector, 1 volume and 1 tone micro General.
I transferred all the original electronics ...
Here it is in EMG 60/81 with one volume and one EMG EXG (eq knob of digging mediums while boosting the bass and treble).

In short nothing to do with the current "NJ Classic" which are in fact reprints of NJ Series of origin but with different specificity including wings nato.

Given the build quality and quality of species and the hardware used I put 10/10. I take back a point for the original BC Rich pickups.

The handle is nice, maintenance well in hand (as often - always? - On the sleeves drivers) in the line of Ibanez Joe Satriani, but a little wider, because the handle of the BCR displays 53 mm at the 12th fret against 52 mm for the JS 100 (or a Slim Tapper Gibson) and approximately the same thickness at the 12th fret (2 mm thick good in addition to Gibson Slim Tapper).

The access to the latest boxes is a snap with the shaft driver, at least until the box 22. The last 2 boxes are a little less because of the lower horn. Kind of like a Jackson Kelly memory.

About 4 pounds, the weight of my Gibson LP Special, a fun to play as sitting and standing is correct even if the placement of the strap attachment on the upper horn is in my opinion not optimal balance but with a good leather strap slip it goes smoothly.

So the overall ergonomics are good, it&#39;s not like a Start or scratches that I would take to scrape in front of the TV slumped on the sofa

Channel driver + fixed bridge = sutainnnnnnnnnnn
Obviously all the maple ca gives his sharp enough and bright, but contrary to what its form might suggest, she is comfortable in all styles, knowing that is double with 2 course. So according to the microphones we will guide the style.

I tested two different pickup configurations:
- Passive with a Seymour Duncan SH6 in a serious and Bill & Becky Bill Lawrence 500XL in acute
- Assets with a EMG 60 in 81 in a severe acute and EXG.
As you can see smoke has very high output and active ceramic magnets I have not done in the dance hall.
What is interesting with the side edge of the maple is that it remains accurate even with a lot of gain.
In fact to write this opinion, I went in D, one hand holding agreement is not bronchée, good for mechanical BCRich and on the other hand, it remains accurate even in D with strings a little flushed.
Nothing to do with my Vigier Marilyn despite EMG 81 in the same fever. The Vigier is more typical, more "cold" because of the carbon handle.

Regardless of microphones, and my VHT rig, the sound at idle is very nice, bright but nothing to do with a Fender. The very nice maple is on guitars!

It must be 3 years that I have.

I had another BCRich Mockingbird long before this one, but also a NJ Serie manufactured in Korea, with a handle screwed floyd vibrato types and two Select by EMG. Frankly not that terrible scrapes, not at all balanced, big heels, using vibrato, average build quality ...

I admit to having always been a fan of this form (Ahh Slash on "You Could Be Mine") and then run the configuration driver, fixed bridge, head 3x3 with the "R" I cracked! Longer purchase "look" blow of heart than anything else. It proved to be very interesting in terms of noise once the original double changed.

PM
Did you find this review helpful?yesno
»