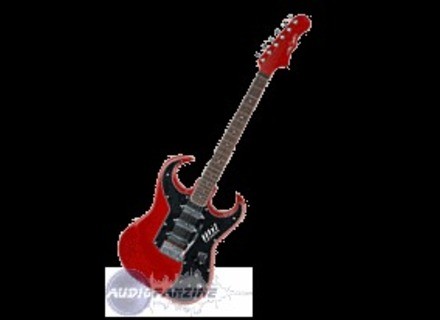 The Bison, Other Shape Guitar from Burns Guitars.

Gordon Shumway's review (This content has been automatically translated from French)

I want prciser the manufacture of Corenne Burns treats trs: I e great inspect every angle, I have no complaints about e finish. The frets are smooth, the solid fasteners, and the perfect polish. Im-pec-cable.
The photo above is not flattering trs or REPRESENTATIVES ... This is much better:

The handle is comfortable trs as dj said, it may be to promote rhythmic dtriment of shredders. That said, if you want to play Steve Vai-ries, you will not feel blocked at the AIGS, the action is low, with a ... The guitar is a little more massive and heavy that the photos do not suggest, but remains below a Gibson LP. The head is standard, but do not dsquilibre Guitar (EDIT: playing up, the natural position of the guitar is almost horizontal, which attaches to the hole derrire liked the horn t on the point, it's really the point, which can interfere).

Unless of being obtuse, everyone can play it. The guitar does not possde rel disability. After 5 minutes, it seems that it has played all his life.

I play a little bit of everything, with preferences for the (s) rock (s): Beach Boys to the Beatles, the Rolling Stones Bob Dylan, Weezer Buddy Holly ... I was looking for a versatile guitar, but with a tural identity I found.

I play on a Hughes & Kettner 30W, and the mixture is explosive!

The guitar team of Tri-Sonic, sometimes referred to as "the best single microphone in the world" ... I agree with this sentiment has not m'tonne not the Brian May Red Special in either team! But in addition, is the electronic gniale: 8 DIFFERENT rglages via two switches, ranging from the annihilating any lower (fawn old radio of the 20s) another straight out an octave ... The pallet is standard if you play more on the tone of potentiomtre. We can not play anything on this prs guitar ... And power level, it has nothing to envy humbuckers (the microphones are connected in SERIES, and consquent, replace double or even triple microphone).

It must be objective: if rglages plthore are, we must admit that most of the time, we play on the same 2-3, the most versatile. The others are useless or compltement unplayable, just trs typs.

I have a few days ago, and have fun like crazy. Guitar compiles the best of various competitors MODELS: sound, comfort, the jouabilit ... I mainly used to the acoustics, but I had a dj possd electric rotten, I also CHAC various guitars with friends, and suddenly j 'I have tried a variety of beautiful MODELS recent years. The Bison bury them all.

APRS, it looks just Plars or not, but the guitar in it even does not suffer any reproach.

The guitar is a package of PPET (honntement but it would be worth even more if silent CHRE yet), I could have put in a clearance sale in Canada, and m 'returned 550 (customs fees included) with a box Burns. At that price is the business of the century.

I would do if this choice? Oh yes!

See all 5 photos of Burns Guitars The Bison »

Other Burns Guitars other Shape Guitars

Other names: the bison, thebison