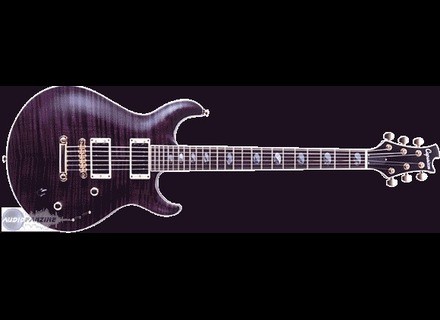 Angelus, Other Shape Guitar from Caparison.

Caparison Angelus
5
Caparison is a small company in Japan that makes hand crafted guitars. The original Angelus was one of the first models that was released back in 1995. Since then, it has gone through various changes, but the one I'm referring to in this review is one of the mid production models from around 2000ish. It has a mahogany body with a flame maple top, a set mahogany neck, rosewood fingerboard, 24 jumbo frets, HH configuration, a three way switch with a volume and tone knob, and a special rotary switch that allows for extra versatility.

Caparison did an amazing job with this. It's somewhat similar to a PRS in ways, but it's much more versatile than most guitars out there. The coolest thing is the rotary switch. The four way rotary switch allows you to split the neck pickup, split the bridge, split both at the same time or have both in series at the same time. It actives by having the pickup selector switch in the middle position. This allows you to get tons of really interesting tones all from the stock pickups. The neck is a medium D shaped neck that's not too thin and not too thick. It feels just right.

The sound of the Angelus is pretty awesome. It has this huge low end sound that a lot of other guitars don't seem to have. Caparison pays special attention to the finish process, and they tend to use thinner finishes than most other manufacturers out there. This allows the wood to resonate more and give it some more "tone." The pickups are kinda weak, so I recommend replacing them with something else. Aside from that, it's nearly perfect.

If you're looking for a double cut guitar that's not a typical strat, I highly recommend checking this guitar out. It's almost like a more versatile PRS but with better tone. Sure, the pickups might need to be replaced, but that's something that's so minor that it's almost not worth mentioning, especially when you consider the versatility of this thing.
Did you find this review helpful?yesno
»

Other Caparison other Shape Guitars