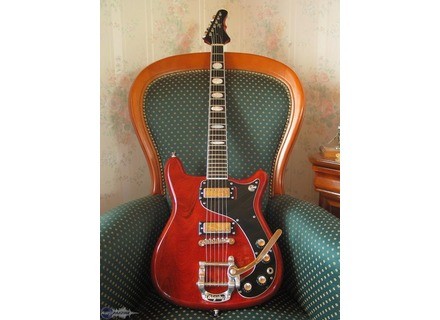 All user reviews for the Daguet Guitars Crestwood Custom

Daguet Guitars Crestwood Custom
5
Made in France to Fontainebleau by the famous luthier Roger Brocket.
The Luthier is best known abroad quen France (US, Australia (Radio Birdman) in Japan with Hellacopters .... Sweden)
He is best known as the Pope and the Bible alive in the 60s Epiphone, Gibson era.
Her favorite model is the Crestwood in all its forms.
Roger Brocket has reviewed the angle handle / body for accidents éciter well known by the holders of Gibson.
The woods used are often of mahogany or rosewood from South America that is no longer on the production of US brands except to pay over 5000 dollar tip.
The handle is pasted into the body to below the micro serious which guarantees a superior strength and sustain the original (I received one with broken neck, I speak knowingly ..)
The Mini Humbucker pickups type are custom made so by itself Scatterbrane by MC2 in Bordeaux. This choice must be following some years of research and testing with virtually ALL manufacturers ... The goal was to reproduce the original sound of microphones for connoisseurs who sounded well and in many registers.
The routing is standard and can also be made according to taste.
Having followed the manufacture of many of his instruments, I know there are more than a hundred hours of work per instrument.Roger was among those who think the devil is in the details. The pickguard is homemade, the entourages of microphones too.
The mechanical type are often Rotomatic, which is far ahead of the quality found on the custom shop of a large US manufacturer ...
Roger can also ask the microphones of your choice
It's very beautiful work and when one grabs Crestwood exit workshops, ona hard to let go.
Have a look on his website: https://www.daguetguitars.com/

The handle is a highway, the frets are whenever you ask.
Lighter weight or heavier depending on the wood you choose. I recently tried a model of type SG KOA. I had a priori on this wood, I do not always come back ...
The sound I have on these mini humbucker is my true happiness. I've always been a strat player, but I always get her a osuhaiter pleu more wrapped. I've never been comfortable with PAF type pickups, My game is too low and too much blur is grafted to my sound when I go into the crunch.
This is a matter of taste ..

I am usually in the sounds of blues rock record, I happen to also jazz and I stand in formation of groove and reggae. I'm comfortable everywhere. This guitar handles very well with effects like Fuzz and other large saturations.
I had a firebird that I adored her and for the object. I found all these sensations with the Crestwood Roger without back problem of the imbalance.
I sold my Firebird to get a second Crestwood with a Bigsby a little doctored to avoid désacordage.

I am user of Guitars Roger Daguet 7 years now and often try new models because Roger is also very beautiful creation still in the vein of I ^ m instruments. His bass is remarkable.
The value for money is amazing considering the quality and working hours there on each instrument. AND when compared to the equivalent in known brands, this is called the custom shop and still have CS known that just over 10 hours of labor berried. So the Masterbuilt and is in Tombre guitar worth twice ...
I can only advise if you experience one day with the chance to try one ..