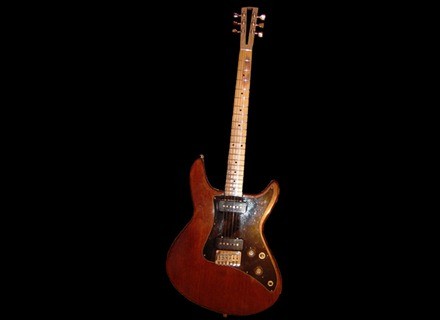 With the help of producer Steve Albini, user Travis Bean with his band Shellac, Kevin Burkett has quickly developed two models:
- Standard model whose body and handle are made of aluminum, in the spirit of Veleno guitars.
- Models called "Custom" with a wooden body and an aluminum shaft as the Travis Bean. Initially, the models "Custom" was available with two different bodies: Mosrite or 500 (copy of the Travis Bean TB500).

The company name comes from the name of the studio of Steve Albini in Chicago: Electrical Audio.

Electrical Guitar Company has developed well and now offers 13 models of guitars, basses and baritones. The best to give you an idea would be to visit their website: http://www.electricalguitarcompany.com

My guitar is a Custom 500. I bought it in August 2006 for $ 1500 including shipping to France and a flight case Fender. I waited two months. I chose the color and radius of the handle. Serial number: # 84

Steve Albini has the # 76 he uses on stage back-up (see photo). He is also available to musicians who recorded in his studio.

In 2010, Electrical Guitar Company now sells this type of guitar in 2300 dollars, the delivery time is past 6 months and over 700 guitars and basses were produced.

The neck is very thin, which is surprising at first. He quickly rises in temperature, the contact is nice.

Ergonomics is good despite a significant weight (like a Les Paul). It stings a little head (because of the aluminum shaft) but it's not embarrassing.

Access to the treble is easy. The guitar sounds great. The output volume of P90 is enormous.
On my Fender Bassman Silverface, I immediately had a great sound.
On my other amp, an Ampeg Superjet, I added a Boss equalizer GE7 to muscle a little low.

This is exactly the model I wanted. The sound is crystal clear, the popping sound is super aggressive. I currently use it with an Ampeg Superjet 12R and a Harmonic Percolator (fuzz).

Its ideal for those who like Shellac, Big Black, or Jesus Lizard.

I therefore used since October 2006, I did a concert with 50aine. I sold a Les Paul to acquire it. I have no regrets. My Custom 500 has relegated my Fender Mustang and my 1965 Jaguar closet.

I love its sound, its look (which a lot of interest in concert).
One criticism: his weight.

4 years later I would buy a thousand times.