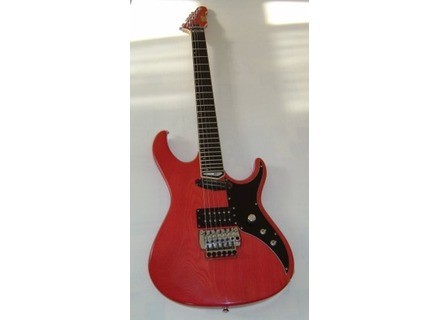 SlapKid's review (This content has been automatically translated from French)" Rare, bellissime, cherissime ..."

ESP 901
2
I had the machine 2 years in the mid '90s, I realize that there is no info on this model better than nothing so here is my opinion.

Japan, 24 frets, tune ovation intermediate type, double-blade single format sleeve, and normal in the bridge.
My 901 had a volume pot and a mini-toggle 3 positions basta. For the tone by pulling the push-pull volume sound became more subdued, no fine option.

Floyd type bridge was a total cat, definitely Ibanez only knows how to make.

The thing taxed in 2400 euros at the time, so it is average.

Fabulous round, an impression of incredible strength, perfect frets, little tiring because a profile.

The sound depends on the microphones, those that equipped the 901 did not let me special memories, they were not actually typed, rather mat (bad option generally better a strong character, or history of knowledge it is). But hey, it is easy to change.

Floyd used here is a cat to fix the ropes, it is not a small cubic room shaking rope as boss but a large screw that comes from above. The idea was under too much hassle to install (complete freedom of screwing, and finished the small cube that takes who knows where), but as the screw is direct pressure on the rope with ben she turns and shoots.
To use this floyd is like the others, namely the base pivots on two height-adjustable spikes, so from that point of friction is used is wrong and must change everything. Ibanez is smarter because two interchangeable blades on basis studs ...

The minitoggle proved very fragile (changed three times in two years, it's a piece of good quality DiMarzio yet) and unmanageable especially in the heat of the action.
It is not intended to, rather to enable a split or another, so smooth and not too often ...

Well, this guitar has the acoustic qualities to play everything with clarity, punch accuracy is net.
Solo lead is a treat of course, is the shovel Patrick!

It is a question of what you will get as microphones, two decades it bluntly progress in this area to stay camped on old nails I would say.

It was sold as guitar pro, but it does not do so, toggle stop in without problems and bridge very unreliable.

So to do it again would be 1) in okaz much cheaper (solid violin, fabulous round)
2) with current typed microphones and really my taste
3) with a true toggle the Gibson (or Ibanez automatically split if necessary) and too bad if it means enlarge the hole
4) with a reliable floyd, it's cheap now, for against a lopro edge may not play because I do not remember trapping vibrato on the table 901. This allows for installation against a Tunad EVH on a normal floyd.

In short, given the costs would have to be less than 900 euros I would say.
Economical alternative: take string provided for floyd (with brass pad at the end) which in turn less housing, and simply replace the minitoggle by a large 15 euros, and simplify the wiring to the extreme.

Other ESP other Shape Guitars