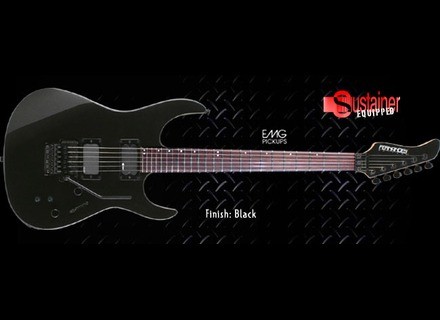 mr fernandes's review (This content has been automatically translated from French)

Fernandes Revolver Pro 81
5
So the pro fernandes revolver 81 is manufactured in Korea (at least for my model is the series 2005), noted that the final assembly of parts is done in the U.S., is a classical guitar hard-rock metal level form in line with other ibanez jackson (curves less aggressive anyway) then a handle to suit almost everyone is either a beam like a les paul or a sheet of paper as a vigier or Ibanez Steve Vai Series, 24 cases of course for fans of solo access to the latest box is good, the guitar level weight is light enough (it&#39;s not a les paul which weighs 40 kg) in micro was a humbucker in handle and a sustainer in EMG81 bridge, two knobs (volume and shine as heads of the scratch) a floyd rose sustainer settings and rope blocks and all for 800 euros, that you ask for?

So as said before the guitar is light enough to play for hours standing up (I have scoliosis syphose a decline in the two glue a cervical dorsal and lumbar one moved and I play while standing aprem WHOLE tt the world should be able to do ) the handle is nice since it&#39;s not a beam for those who have pti fingers or a piece of paper that contradicts those (ammateurs heavy, thrash, hardcore and other barbarians) like the beams and are not afraid to break guitar, the neck is super easy to play, the frets are not too high nor too low, in short a good ergonomics, 2 knobs, a 3-position selector pickups, a floyd rose (the large class) super easy to use (no worthy of support as a nag like my replica of stratum 150 euros), the sustainer system is compressed into 15 seconds, which says only downside ben floyd said adjustable tuning a boring, in a game of rope a different voltage from the previous etc ... but hey it&#39;s like that on any scratches with a floyd.

I am a hard rock-metal guitarist, this scratches so obviously for me, now I&#39;m a fan of fernandes I&#39;m not chauvinistic so far, so I warn you direct your other fan of blues, pop, reggae ska jazz etc, turn way this guitar is not for you, why bin simply because in the EMG81 bridge is just terrible in saturated channel (sometimes I play on the KH3 Kirk&#39;s friend), in clean channel is (much) too slamming (in mm tps this microphone is not made to play and I have nothing against Coldplay coldplay j&#39;aime bcp some tips from them), so be smart guitarist on Rabbat the neck pickup, ie the sutainer fernandes from home (like the humbucker EMG), and there the sound is clean, clean and not slamming but the sound is not as hot as desired on a good or a Seymour Duncan humbucker gibson, but it&#39;s still a great sound I play some stuff installed and it goes very well ac micro sustainer, whose main function is to jle Rapel (no matter the position of the pickup selector) switch on the receiver while in EMG81 the micro-wave sustainer emmet by vibrating strings of itself, so we obtain an infinite sustain, for it simply to trigger a button on the guitar, sustainer and the other button is used to switch from his "infinite" to "infinite harmony," it&#39;s pretty fun, but for both super quiet stuff Planner (prennons such as the whistling at the beginning of With or Without You U2&#39;s The Edge that uses this system) or the stuff for there comes the psychadelik Pink floyd ac which one can tweak the sound infinity, that is that typical hard this guitar is quite versatile: EMG81 in hard (and it sounds!) and micro sustainer in clean and everyone (almost) there is something account, here&#39;s one I can get sick of ac distos similar to Metallica when I play a Epiphone vieu combo that stinks and a zoom 606, then to all those who already have a good or a Mesa Dual Rectifier at randall them and reluctant to go on that scratch you will not be disappointed, but the likes of BB King, queen or bob goes his way

I use this guitar for a year, I played on avt telecaster and it is not the same register, but to have already played on ESP, Gibson and others it is clear that comparing what I recall that comparable and this guitar COST 800 euros So you bring in saying "yes but my PRS Modern Eagle 5600 euros it sounds better"-_-
level value for money is rather stunning, I have no problem with distortion, and good for its clean only downside too much slamming of the EMG and the lack of heat from the micro sustainer, noted that the guitar is totally active, it is a more Paske was less crackling and other crap, over fishing but good should not be run out of battery at a concert if it is wrong (note that if you are not retarded and forget to unplug the jack from the guitar when we play well over a 2-3 month battery life), the guitar is easy to play, simple, any fan will be hard to totally satisfied (and the class of persons s&#39;interressant this guitar if you like the blues look elsewhere you will not find your happiness with this guitar, short short short, in a neutral, and it sounds for the money I&#39;ve ever seen a guitar sound as much (can be the cort zenox is 1000 times less but proportionally speaking at value for money must equal, if not frankly I do not see) if you like hard, you want a big sound and you can not afford buy a ESP, a PRS, an ibanez satriani or steve vai series but you still want the very good stuff, this guitar is for you

Other Fernandes other Shape Guitars