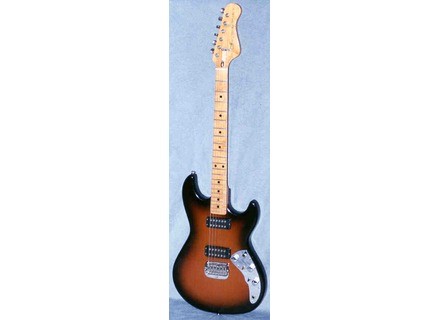 F-100 Series II, Other Shape Guitar from G&L in the USA series.

G&L F-100 Series II
4
I am a guitarist primarily, and have been playing for over thirty years. I can play any style but am by far into rock more than anything else. Played in hair bands in the 80's and cover bands in the 90's and now I write my own stuff and play all the instruments and sing on my recordings.

The best thing about this guitar by far is the neck, its perfect. better than any strat neck Ive ever played, maybe because Im used to it, but anyone I have ever let play it shares my opinion. the guitar came with either a rose wood fret board or maple, I have the maple and that makes for a faster feel in my opinion anyways. the neck definately makes this guitar special

Theres not much not to like about this guitar unless you get user specific, for one thing it's not what one would use to play heavy metal hard core rock, it lacks a string lock so excessive use of the tremolo causes it to go out of tune, and the pick ups are not your average pickups either they appear to be of original design. Its got a phase switch and active electronics, probably excellent for country rock, and jazz and old standards. It also weighs a ton

Its a well made instrunment to say the least. Solid body contruction, no laminated wood here, solid mohagany body, and although it looks nothing like one the wood reminds me of the sg. the neck I already touched on and the wiring has never shorted out on me in the 25 years I have had it...amazing , not even the jack has been replaced or repaired once!!!

this guitar is definatly one to grab if you come across one.

zikzag13's review (This content has been automatically translated from French)

Other G&L other Shape Guitars