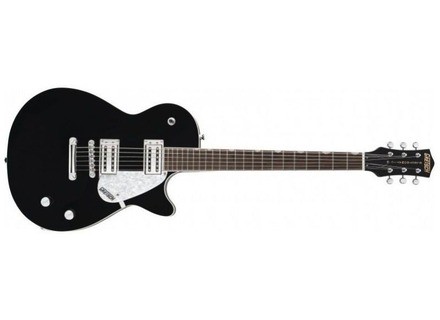 G5425 Jet Club, Other Shape Guitar from Gretsch in the Electromatic Collection series.

MPFree's review (This content has been automatically translated from French)"It&#39;s a Gretsch !!"

Electric Guitar Gretsch Electromatic series of Made in China.

So here a parenthesis, the guys at "Michou Now" (pun intended) told me it&#39;s a Gretsch, it goes on their site it is they who are right. It is marked "Chambered Basswood Body with Arched Laminated Maple Top" ... Basswood (Linden) Maple (Maple)

So there is at Gretsch Maple! Hey guys force to get your "scoops" we will end up using them to dig a hole with your bodies ...

There do not dream it&#39;s not the famous "Filter Tron", but if you want you can always buy more later

Ha ben and Bigsby is where ??? Ha turd € 260, there is not the Bigsby, I should have suspected. At the same time when you see the whole rotten vibratos that affublent the Squier Strat and some even see that everyone ended up blocking ...

Then the handle is not thick but it is compared to Strats are planks. A friend told me "that&#39;s cool I love my sound!" Yeah, well my bass is ultimately easier to play. And at first I frisais anything goes, a quick glance everything seemed settled at me naked ... Finally I realized she forgives nothing, however as a beautiful woman when we understood how to touch it &#39; is happiness! And who can do more can do less: playing it I&#39;m progressing faster quality level of my touch ... To finish it (the handle) the perceived quality of the plating of the keys is good, the finish and the touch very good.

It weighs his weight! I struggled to find the balance, I often played sitting for the Rock attitude we&#39;ll see when I grew up. At first I weighed too much on my left arm, I corrected it since it gets better. Must break a little more wrist saw the width of the handle. I put the pick between the two mics and I often pat on the Pic Guard. It does not include the amp of course but it&#39;s annoying. It&#39;s a little ransom for all hollow body guitars so shapely. Overall I had to take my guitar everywhere compared to a form of SC marks. Must say that in fact it is rather large, knowing that this is probably the smallest of Gretsch! A stupid thing the seller saw me leave with a rigid cases like LEs PAul 125 € and it does not fit well !! Be warned if purchased by mail. I went with a "bag" at 25 €. Gretsch adapted for the case and with the logo on it I not talking about the price and must be found (200/300 roro) ...

CAUTION in all my comments / rating I consider the factors: price, reputation, brand, and expected compliance with the image ...

So my style of music ... well um it depends on my instrument style! When I run my software computer music with me and VST master keyboards, I do not do the same thing when I plug my Gretsch in my Fender FM 212R! And that&#39;s also why I started on guitar, I pool the virtual.

So clearly the Gretsch for many it&#39;s the Stray Cats, Brian Setzer, the Rockab and Country. Well not that !! Y also has the Beatles, Hard Rock groups etc. But let&#39;s cut to the chase and sound is good, said the donkey?

Already the two microphones are beautiful and reinforce (full chrome) the look of the Black / white / Chrome guitar. From the first chord, phew it&#39;s Gretsch! We do not feel the low end is little experience with Squier! We do not ask if we will change them directly. Except that since I heard about the famous "Jones Tv" I can not wait to buy two. Well, it&#39;s just going to double the price of my guitar. It seems that the model Famous Brian Setzer has one. Well she just costing € 3,300 !! So let&#39;s say for now i like the neck pickup, it is clear, he crystalline thickness rides and play country / folk / rock. I feel like a dry powerfully with sound! Well the hollow body, the size of the animal and the choice of wood are not there for nothing. For the saturated I have not explored too, but I know it sends it&#39;s still the Humbucker and when you put them! For the crunchy, see Jazz Blues level it&#39;s all good! Are the sustain and thickness. Warning Gretsch it still has a little garish side must love. Rock for 50/60 it&#39;s obviously made for!

The real complaint is that it has only one knob for tone, so you can not qualify when both pickups together, damage is used. And above all it is not very progressive. So I looked at the condo and curiosity is a typed deemed condo for single coil and humbucker not double !! Hmm ... after reflection because the microphones G are screaming at the base they can be made that choice to break a little more acute. Anyway I&#39;ll probably opt for a "paper oil" in the idea of ​​a vintage sound and I&#39;ll buy two different I would do my tests. I think the knob has to be good for something, to change too. However much there is anything you want to fender for both Gretsch have to dig deeper to find what to do.

I just bought it. So let&#39;s be clear, I wanted a new guitar (to me) I did not have a specific choice, I have a big background in musical knowledge and I am new guitar. Compare with the two tenors Fender and Gibson. But we have to go down range and talk about Squier and Epihone to be more just, finally under their respective brands. Ibanez are good that everyone knows, everyone appreciates, but you never see on TV.

And just what is significant is that this is not a label that&#39;s a Gretsch it&#39;s written on. Maybe a little too much to love. There is little point in a beef, it will not be the poor and the uninitiated will quickly for a guitar to 3.2 times its real price. And it&#39;s good! Even a "small" Gretsch is in a ... Compared to the competition it really feels to be upgraded (it just simply turn the key fob).
In terms of value, I believe his side will be focused and honest for a guitar of this range, the gray (if they stop) may be even more valuable. I want this color but had to order it and the black seemed to me more class and go anywhere. Besides anecdote I get to shop for the black, the guy told me not I should order more ... I say if your site they say it is good (60 terminals shit go back when same). Wait it was delivered this morning, I&#39;ll see. Ha well I have two ... and I take one! Now out of stock on the black, gray and 15-day deadlines mini on the net and in stores: do you think this is a sign?

Conclusion: you want a real guitar with a real brand, a real face and a real sound? You need a Gretsch G5425 Jet Club. Nice finish, great value, almost an investment. For the rest of my troubles with this guitar I&#39;ll open a topic on the fofo

12 of 15 people found this review helpful