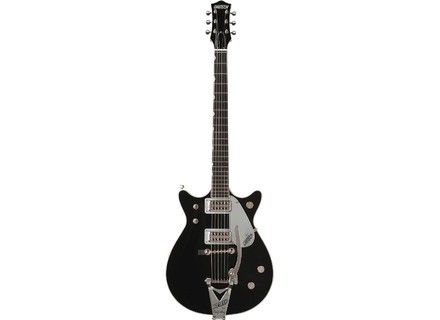 Gretsch G6128T-1962 Duo Jet
3
Gretsch and been a popular maker of Rock N Roll and country guitars for many years. Nowadays they are mostly used by rockabilly players. Guitar players like Chet Atkins and Duane Eddy helped popularize the world to the Gretsch look and sound. This is an early 60s style Duo Jet guitar. You can tell this is the early 60s style because it has the Dual Jet style cutaways on the body and has the Filtertron humbucking pickups. The guitar is a solid mahogany body with white binding. The neck is mahogany with a 22 fret ebony fretboard that has a zero fret. The fretboard has Gretsch's Thumbnail inlays which look nice and have a clean look. With the dual Filtertron humbuckers you get all the normal 3 position switching. Each pickup has its own volume control along with a master volume. There are some extra switching options. There is a 3 position master tone switch. Position 1 is a medium level, high frequency roll off, position 2 is a bypass while position 3 is a slight level, high frequency roll off. There is a roller bridge to go with the Bigsby.

With most Bigsby guitars that thing is on there just for looks or something to do at the every end of your set. If you even think about using the tremolo it will go out of tune. If you breath or look at the Bigsby it will go out of tune. The roller bridge helps but it does more to save the strings than to save the tuning. The ebony fretboard feels good under your fingers and the Thumbnail inlays give a clean classy look. The zero fret is a nice feature I wish more guitars had. With the zero fret your open strings sound exactly the same as your fretted strings. The tone switch instead of a tone knob is an anachronism. Guitars had it right the first time. Giving you 2 ridged tone settings instead of a flexible knob is not much of an advancement. I disliked this feature so much I pretty much ignored it and played the guitar as if it didnt have any tone controls.

Compared to the Black Penguins Dynasonic single coil the Filtertrons on the Duo Jet have a bigger sound but retain the twang and stringyness to keep the Gretsch sound. Because of the Filtertrons the guitar is better for more overdrive than the Dynasonic guitars but you still dont want to play metal with this thing. It is for Rock N Roll. The Bigby can get you a nice tremolo effect, once. But the Bigsby is part of the Gretsch sound. The Filtertons have a real single coil quality to them. They are really crisp in the top end. The tone switch just makes me mad. You can go from kinda dark and smooth to kinda honky and middy and no where in between. Its like an auto-wah with only two settings. Sometimes I want to know what guitar designers 50 years ago were thinking. Maybe switches were cheaper or something. Either way it does not sound as good as a normal tone control.

I like the whole Gretsch solid body line but this guitar has some features I do not like. Im not a Bigsby fan. I am not a tremolo fan in general but if I have to have one I would prefer it to to at least pretend it wants to stay in tune. The tone switch is just annoying. I guess in the 60s they thought switches were cooler than knobs or something. The Filtertrons I do like. They are humbuckers that have the single coil twang without splitting or anything. There are so many Gretsch Duo Jets models out now that it is easy to find the one with the features you like. They all have crazy Gretsch model numbers so find which every model number has the Filtertrons with a hardtail and a proper tone knob and buy that one.