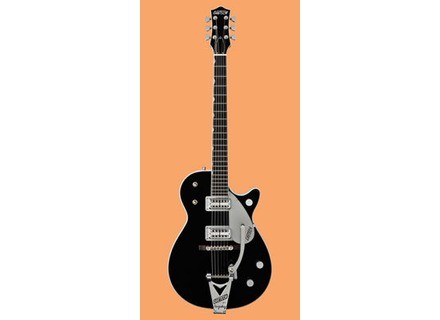 G6128T-TVP Power Jet, Other Shape Guitar from Gretsch in the Power Jet series.

Gretsch G6128T-TVP Power Jet
5
The G6128T-TVP is part of the "Professional Series" of Gretsch's premium made in Japan. It has two humbuckers TV Jones Powertron. Electronic routing and how Grestch: a volume knob for micro, one master fader, a 3 position switch to select the pickups, another 3-position switch for the tone (general). Lutherie: mahogany body with acoustic chambers, curved table, mahogany set neck one piece, ebony fingerboard with inlaid into half moons. A single cutaway on this model but there is a double cutaway version with better access to acute. The bridge is on the table but with a system of pegs that fit together, allowing a perfect fit. The fine adjustment of intonation is possible through Adjusto-matic system identical to that found among Gibson. The Model T was equipped with a Bigsby vibrato B3C. The head is equipped with mechanical locking Sperzel. Wiring it to the former: there is no treble-bleed, which means that by lowering the knob, the sound becomes very dark and very "muddy" as they say on the other side of the Atlantic. For a modern game, it will play to the weld and add a few components in the circuit to make up for the loss of high frequencies. The master volume pot is not linear: you can not really make a nice violoning with. For a regular on the Telecaster, it's a bit disappointing. It will again play the electronics and change the potentiometer.

I withdraw the whole point for this defect. The rest borders on excellence

The grip of this model is the modernization of the legendary Duo Jet which made the happiness of George Harrison, Jeff Beck, David Gilmour and many others. This upgrade is based on mechanical characteristics which improve the resistance of the agreement. Otherwise, the addition of microphones Powertron is not, as one can read a little too often on the net, a concession to metalheads who will be able to use a Gretsch shred. Of course, nothing but oppose the Power Jet is primarily a Gretsch, that is to say basically a vintage instrument or roots. The neck is thin enough such a guitar, very nice. Highs are relatively accessible, but not as much as a telecaster for example.

I would not have wanted a different feel when played on a guitar of this type. So I put the maximum score.

Fortunately, the Gretsch sound is there. The Powertron pickups are not "modern" but Filtertron with an output level higher and more mediums, which does not displease me.

I got what I wanted to sound like ... except for what is the volume correction, which is unusable, while a guitar with this level of output would have needed to be played at volume knob to assay the gain during the game I withdraw two points.

I chose the Power Jet pinned to the bridge with Adjusto-matic, not being very excited at the prospect of re-adjust intonation for each string change or at every concert. I thought quickly remove Powertron Filtertron to put the most classic. I was very pleasantly surprised to discover excellent vintage microphones, keeping grain Gretsch with a little more roundness, squinting of Gibson PAF. They fully deserve to be in this new version of the legendary Duo-Jet.
I play for six months on this guitar and I love him more than when buying: it is beautiful, very charming, full of personality, fun to play and his violin is exemplary. My only regret is that modernization could be expanded to include a treble bleed in the electronic circuit unnecessarily accusing her age. Fortunately, it is always possible to modify the circuit yourself with the right components, the correct pattern and a little skill.
I would do this choice without hesitation.