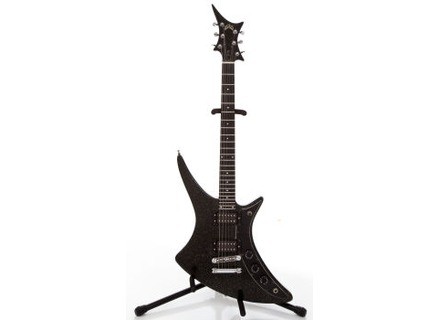 Guild X-79 Skyhawk
3
My Guild X-79 Skyhawk is a 1984 model that has three single coil pickups. Each pickup can be put out of phase or turned off and there is a volume and tone knob. The guitar has a set neck with 24 frets. The neck is very thin and quick to play, however the frets are also very small and can be hard to play, especially up the neck. In addition, the volume knob is located very close to the strings, making it easy to accidentally lower the volume. However, the volume knob is in a great spot for a disciplined player to be able to do a lot of volume swells.

The small frets can be a little difficult to play and to solo with, but might be useful for someone with smaller fingers. However, the guitar very light and is exceptionally well balanced.

The set neck produces great tone and sustain, but the this shape guitar (think heavy metal) ought to have double-humbucking pickups instead of single coils. Changing the bridge pickup for one of the Seymour Duncan heavy metal pickups will go a lot way at improving the crunch of this guitar. The stock single coils tend to feedback pretty easily.

I bought this guitar because of it's space-age shape and because at the age of 16, I thought that's what my guitar hero from Twisted Sister, Jay Jay French played. JJ took the Guild endorsement, but from what I read (once he endorsed his own Epiphone model) he actually played a Les Paul on all of the Twisted Sister recordings, so who am I really to believe, and when?

Whatever may be the true story, this guitar does look pretty badass and can go a long way to fooling people you can rock hard, which is just what I needed to trick people into thinking at 16 since it was my first guitar. There are other '80s metal looking guitars, but I think this one has the coolest looking headstock of them all. I saved up my money to buy it, and spent a bit more than I would on some other first guitar, because I knew my parents would flip out and it would probably be the last guitar I'd probably be able to buy. It turns out only the former was true.

I hardly ever use it anymore because it's difficult to play on such small frets. But, I'll probably never part with it since it's my very first guitar.
Did you find this review helpful?yesno
»

Other Guild other Shape Guitars