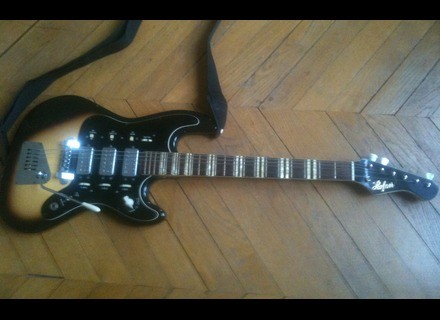 176, Other Shape Guitar from Hofner Guitars.

In Bear Suits's review (This content has been automatically translated from French)" Surprising!"

Hofner Guitars 176
5
Made in Germany in 1964 (approximately, it is the date found on the faders).
I do not know what wood it is made. It's real nice wood anyway (not rolled), even if a thick veneer on top.
Big stick, not a telecaster but not far behind ...
Three humbuckers (it was a sort of response to the Hofner Strat), each with its on-off inverter, so many combinations are possible, but ... There is a "but" as we shall see.
Multiple settings (too much!) With a master volume, three individual tones, a 5 position selector for 5 general tone, two position for an inverter output volume "solo" or "ryhthm" ... Too.

The guitar is very ergonomic, nothing to say on this, see the model Hofner is inspired, anyway could hardly fear the worst.
Do not play like a big nag with big paws, because all these controls on the plate are subject to change at once to pick. This does not mean that the guitar is unsuitable for heavy rock, on the contrary it is rather his strong point, just need to get used to using it.

The thing is that, as often on old Hofner, I recovered with microphones Shooting Down ... So I was a little skeptical of the sound of this guitar. I send in a guy in Germany that is a little informal specialist es Hofner.
I put them together. And there ... Incredible! One of the best guitars I have, it is no problem competing with my Fender Mustang.
For all controls, I carefully disconnected some because they were misplaced and too many half not used much (some are very well ...) Basically, the strength of the guitar c is wood and microphones ...
Attention can be wholes possible combinations of microphones, but some are necessarily out of phase!

Used twice a week or less repeats on stage for 8 months. We offered it to me, I do not doubt me the monster I had in my hands at the beginning, so it is advisable to put the money nécessair eto maintain in one if you find it.

Other Hofner Guitars other Shape Guitars