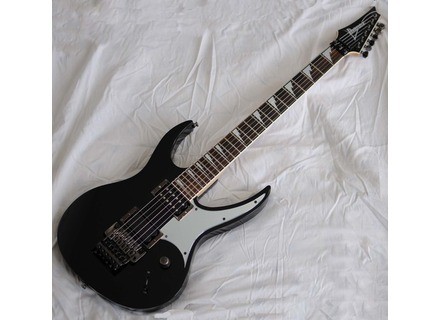 540PII, Other Shape Guitar from Ibanez in the Roadstar Pro series.

Ibanez 540PII
4
The Ibanez 540PII was part of the old Power series that started way back around the late 80s. The body itself is actually a reversed Power body, making the guitar more radical than most others out there. It features a 24 fret Wizard neck with sharktooth inlays, binding and a variety of pickup options. The one I tried had two humbuckers. The body is made out of basswood, and the neck is maple with a rosewood fretboard.

The body on this is definitely an acquired taste. One real cool thing it does is have an extended lower horn to get to the higher frets easier. While it's easier getting there, I find the back of my hand tends to hit the lower horn since it's extended. The upper horn actually feels fairly normal, so I think it's just the lower horn that's extended and pushed back. The guitar came equipped with the famous Ibanez Edge bridge, and those things are absolutely amazing. It's easily one of my favorite floyds out there.

The pickups in this guitar sucked. That said, the guitar itself was very vibrant. I didn't replace the pickups in this actual model, but I know that DiMarzios tend to work awesome with the basswood bodies that Ibanez mainly uses. I have this problem with most Ibanez for whatever reason. The electronics are a real weak point, and they're only just now starting to use actual production model DiMarzio and Duncan pickups, but even then, they're not in all the models...

These guitars are hard to come by now. If you're an Ibanez fan, it's worth checking out. The Power series was a unique line of guitars that helped push the more extreme looks of guitars in the late 80s. Just be sure not to pay too much for one of these as they can be a bit hit or miss, and if the neck wasn't taken care of, there's a chance it could have warped.
Did you find this review helpful?yesno
»

Ibanez 540PII
5
Manufacturing Japan, Fuji-gen. 3 years production of memory, originally a signature model of Alex Skolnick of Testament Thrash metal group (still active and also ... jazz guitarist). It is the aura seen with very little, but in any case the beast is built for rock and metal.
Shaped body type RG reversed but a bit touched up, we like it or not, but that is its charm.
Channel Wizard inverted head, neck end, fast, Ibanez quality what. The body is mahogany I think, quite heavy, excellent resonance.

There were two config I think, two doubles and a single double, I have run the model Simple Double-bridge, and microphones rockent to death! The dual Ibanez F3 is devastating, but with a nice bite and a well-defined saturation. Just run and efficient and allows hendrixiens beautiful sounds.

Everything is good in this guitar, which is collector!

A guitar built for big sounds, but not that, nice clear sound with the microphone round and beautiful jazz fusion lead to the bridge. However, much less versatile that a scratch or two or three microphones doubles.

I love this guitar, that I have long sought, it sounds, makes me want to write good riffs nervous and my fingers therewith feel well at ease! I have given in D for the metal and modern microphones follow carefree.

Ibanez excellent, I do regret that the color black, as Ibanez has done in yellow, pink and red m would cease to have more, but find this guitar is already a joy!
Did you find this review helpful?yesno
»