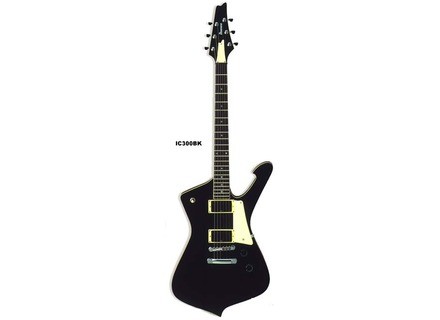 IC300, Other Shape Guitar from Ibanez in the Iceman series.

This guitar has nice pickups, which makes it have a nice solid sound. It has a awesome shape, and best of all... Daron Malakian from System of a Down plays this guitar

The only thing I don't like is how the strap is. But you get use to it.

This guitar is amazing and has a sweet shape to it.

Ibanez IC300
3
This is the guitar that Ibanez released for the budget line up. It's not as good as the other versions out there, and it's intended for those who can't afford the higher end models. The guitar features a basswood body, a maple neck with a rosewood fretboard, 22 extra jumbo frets, dot inlays, a hard tail bridge, two humbuckers, one volume, one tone and a three way switch.

The guitar was average in every way. The first thing I noticed is that this guitar weighed a ton. It was almost as heavy as some of my Les Pauls. I'm a firm believer that a heavy guitar is not necessarily a good thing. In fact, I find them to be usually dead sounding when compared to other, lighter guitars out there. The frets needed some attention, as did the nut. A good do-over was pretty much needed. The ends were sharp, and the frets weren't that level. The nut was worn down pretty good, and it needed to be replaced. The guitar itself has also seen some good amount of abuse, too.

The guitar did not sound that great. The first thing I should mention is that this had some faulty electronics in it. The tone pot was pretty much dead, and no amount of electronic spray seemed to fix it. The volume crackled, but it wasn't too bad. The switch was starting to flake out, too. What's worse is that the guitar itself didn't seem to be all that resonant. Combine all of that with some of the bad Ibanez pickups that are normally installed in this, and you got a recipe for disaster. That said, I can't fault it too much as I didn't try it with aftermarket pickups, so I never learned its true potential.

Ibanez IC300
4
The Ibanez Iceman Series IC-300 is an electric guitar that is suitable for any use that you'd like. I recently tried out the IC-300 at a studio where I was recording for a week, but it really wasn't my type of guitar so it didn't see much use. The guitar has 24 frets and two humbucker pick ups. I don't know what type of materials this guitar is made out of...

The overall feel of the Ibanez Iceman Series IC-300 is okay but it isn't my favorite feeling guitar in general. It has a pretty thick feeling neck and isn't the easiest for my hands to grasp. Of course this is just a matter of personal preference and opinion, as I'm sure there are some people's hands who fit this guitar perfectly. The pick ups have just a single tone and volume that control both, and a standard three way pick up selector as well. Getting a nice sound is definitely a relative thing here...

It's hard for me to judge the Ibanez Iceman Series IC-300 accurately in terms of sound quality, as I found out that this is not the type of sound I'm looking for with my music. It's got a really thick and heavy sort of sound, which would certainly blend well for harder rock and metal, but since I don't play this type of music it's hard for me to say how it compares to other guitars of this nature. I thought that I'd be able to get a usable tone from it for what we were doing, which is softer rock, but it wasn't the right environment for the guitar.

The Ibanez Iceman Series IC-300 is definitely not the guitar for me, but that doesn't mean it isn't a useful guitar to someone else. It's definitely the type of guitar that you're going to want to use for metal and harder forms of rock, so if you're looking for a guitar of that nature, it's worth checking out. I'm not an expert for this type of music, but it's got a very heavy sound. Worth a gander for those interested in guitars suiting the genre...
Did you find this review helpful?yesno
»

Ibanez IC300
5
For being a Korean made, bolt on neck guitar, this 6 string stole my heart quickly. With 22 frets to make it scream, and two AH humbucker pickups, along with the tune-o-matic bridge, you've got yourself a guitar that screams &quot;rock and roll.&quot;

It's knob configuration is streamlined for those who just want to pound out the tunes, with just one volume and one tone knob, and the pickup selector switch in the Les Paul position, right by the thin, Iceman neck.

This is a more radically shaped Les Paul.

The neck has an amazing feel, and after playing it a while, it easily drops into the nice, worn, have-been-playing-it-for-years feel to it. The single cutaway provides easy access to the top notes, and I've never had a problem playing anywhere on the neck.

The design isn't nearly as ergonomic as I'd prefer, however. The bound edges get kind of weary on your forearms after a bit, and there's no real contouring so to speak. With such a radical shape, you'd think they would maybe make a contoured top or rounded edges to make it more radical of a design.

Also, the guitar is very neck heavy, so you pretty much have to hold it up the entire time you play it standing up. The basswood body just isn't heavy enough to counter the weight of the maple and rosewood Iceman neck.

That aside, one can easily get a nice sound form the AH 1 and 2 pickups, and can really rock things out.

It fits some of the music I play, which is usually straight forward rock with a punk edge to it. It's definitely an attitude guitar.
I run this through my Line 6 Spider and a Morley Bad Horsie Wah pedal with great results
The sounds I prefer to get out of this guitar can be summed up into five words, and those are &quot;distortion, distortion, and more distortion.&quot;

I don't like using the AH pickups for cleaner tones due to them being kind of hot pickups. It's a rock guitar, and it should be used accordingly.

I have been using this guitar since 1998 or so. It's my first electric guitar, and I've loved it since.
What i like most about it is that it definitely lets you stand out in a crowd. The shape just screams &quot;look at me!&quot; And usually people will.

I did try other models, but at the time, they definitely were not in my limited price range. This was a steal when I got it used with a hardshell case, so I did not want to let someone else get it before I did.

For my money, buying it used, I'd say it was worth the money, and would buy it used again if I had to. I don't think I currently have the option of buying it new anymore because I think Ibanez has moved on to make the IC-400 guitar, with it's set neck, and higher quality binding.

I would probably make the same choice given what I know now about the guitar. I have a soft spot for this line due to its use in some of my favorite bands, such as Kiss and White Zombie. If it was good enough for them, it's good enough for me.
Did you find this review helpful?yesno
»
Read the 5 user reviews on the Ibanez IC300 »