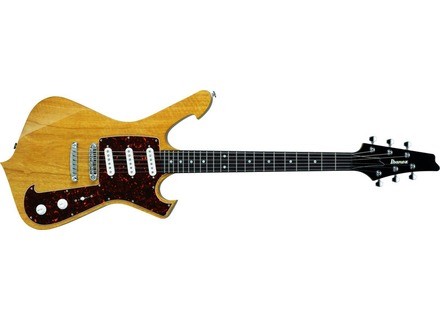 PGMFRM1, Other Shape Guitar from Ibanez in the Paul Gilbert series.

Ibanez PGMFRM1
4
Paul Gilbert has always been known as one of the best alternate pickers out there. However, he's recently going back to some of his old school roots and doing more of that classic rock thing. To help capture that crazy vibe from the 70s, he went with a crazy design: an upside down Iceman. It uses some unique tone woods that really help make it stand out. The guitar features a korina body with a korina neck, rosewood fretboard, 22 frets, dot inlays, hard tail bridge, special pickguard, three single coils, one volume, one tone and a five way switch.

The first thing I noticed was this guitar has some weight to it. I'm not a huge fan of heavy guitars thanks to a back injury. I also find that they tend to sound a little dull at times, but this wasn't too bad. The neck on this is pretty thick. It'snot what you'd expect from Ibanez. In fact, it's also round as well. The guitar has a 12'' radius instead of the standard 17''+ radius that you normally find on Ibanez guitars. The frets are medium frets, and it almost has a Les Paul kind of feel going on. The ergonomics aren't too bad with this. The tone controls are easy to reach, and I didn't have any issues switching on the fly.

The guitar has three of DIMarzio's special Area 67 noiseless pickups. These are noiseless pickups that actually sound like single coils vs the stacked singles that don't really sound like singles at all (ala HS series). The Area 67s are kind of like an old school pickup. They have a strong treble, but they also have this really cool low end that only singles can pull off. The can't really do metal, so if you're expecting that, you might be a bit disappointed. However, they were able to excel at this old school 70s rock without any issues at all. I was getting some killer classic Hendrix tones with this thing (yes, 60s, I know), and it was just really fun to play overall. It's cool to see Ibanez willing to experiment a bit.

The biggest issue with this thing is that it costs a fortune. Not many people can afford this thing, and I have a feeling not many people will be going out to even play the thing as it's not one of the standard shapes you tend to see out there. It's a very cool guitar, and it has some really nice, almost Les Paul kind of sounds going on, but it's not exactly something I'd recommend to everyone. Not everyone likes Korina, either. I know that I'm personally not a huge fan of it.
Did you find this review helpful?yesno
»

Published on 02/11/09
The PGMFRM1 Paul Gilbert "Fireman" is described as the doppelganger answer to the Ibanez Iceman.

See all 8 photos of Ibanez PGMFRM1 »

View all 3 videos of Ibanez PGMFRM1 »