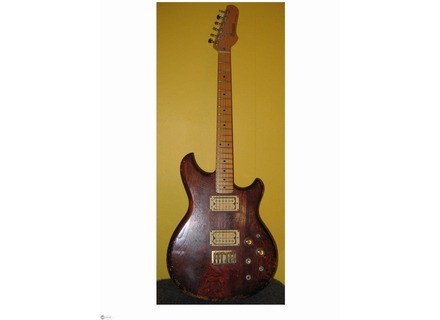 SB-70, Other Shape Guitar from Ibanez.

Ibanez SB-70
3
These are some of the very old Ibanez guitars that they made before the Roadstar series came into play. They're a bit low budget, so they need to be inspected more than some of the other Ibanez guitars. The guitar has a mahogany body with a maple neck, 21 frets, dot inlays, a hard tail bridge, two humbuckers, two volume knobs, one tone knob, a three way switch, and this one had a coil split switch on it.

This guitar was pretty worn, and considering that it's like 30 years old, it's no real surprise that there would be some of these flaws. First of all, the nut needed to be redone. It was worn pretty heavily, and you could notice that it was pinching the strings. The frets on this were also worn pretty hardcore, and that was after they were leveled by another luthier. It needed a complete refret since they were so low already. The neck joint had a bit of a gap in it, too. The bridge itself was a bit rusty, but I didn't notice any obvious burrs in the saddles.

The pickups in this were actually aftermarket. They were two DiMarzio PAF Pros. The PAF Pro is a pretty cool pickup, and I find they work best with neutral to darker woods. The PAF Pro in the bridge is very open sounding, and it's pretty versatile in what it can do. However, I find them to lack the compression that I like. I also find that it didn't mate well with this guitar. The PAF Pro in the neck was pretty cool. When you turn down the tone knob a bit, it's almost like a Breed or Air Norton but without the huge mids. The guitar had a coil split switch which added that single coil kinda tone, but that was a mod done by the previous owner.

These are hard to recommend. If you're just looking for a decent beater guitar at a cheap price, they can be something worth looking into. However, they were part of the budget line, and they're not the best guitars out there. I find that you can get more for your money if you look elsewhere.

RikéRak's review (This content has been automatically translated from French)" Japanese rare beauty!"

Ibanez SB-70
4
Made in Japan in the early '80s, the Ibanez does not exist in the catalog of the brand. This "stratabound" model is unique in that it is an assembly of a body of the Studio series with a round of the series Blazer and it was made only 300 copies. The body is swamp ash (swamp ash). The neck is 22 frets maple with maple fingerboard and a trussrod bullet form. The bridge is fixed to 6 bridges. The tuners are in an oil bath. The equipment is 2 Alnico humbuckers controlled by one master volume and 2 tone controls (one for microphone) a 3-position selector and a toggle switch. The varnish (reddish brown) reveals the beautiful wood grain. However as there is no shield, he abyss quickly and easily reach the wood. So except this detail, the "beast" is well equipped and very well assembled: it is clean, clear and it smells good strength and quality of the components.

The C-profile neck is very comfortable, fast (as often Ibanez) and allows to chain agreements, crossed and solos effortlessly. In contrast, although much heavier than a Strat, imbalance guitar if you play sitting body: a real downer. This is an instrument that can "feel" better playing up. Access to the last box is no problem and it sounds! Good vacuum resonance is confirmed once connected.

Without releasing a fantastic sustain sensations found close to a Strat with a little more mellow and power under the hood (it still has 2 double!). The neck pickup is perfect for blues, jazz, pickup sends wood sounds hairy rocks. The more crystalline intermediate position send good casseroles funky. The toggle switch mentioned above can only be used in the middle position (the two mics together) as well as the pickup. It "turns" in the single coils and humbuckers sounds become more "slap". I plug this into a nice Japanese old Peavey Backstage 82 transistors manufactured in the USA or in a Epiphone Valve Junior tube. As in the other case it was a good range of sounds.

Paid 1,600 francs in 1981 (250 euros), it's been over 30 years since I used. This is my first electric guitar. It ages well, except for what is the polish that is fragile. Despite this flaw, she never gave me even if there have been changes in the "guitar" world, I do not consider myself one second apart.

silverbullet's review (This content has been automatically translated from French)

Channel pleasant, good access to acute
guitar rather light, unbalanced when playing sitting
the wood of the body is very fragile it marks every time and varnish from easily
Good sound jazzy on the neck pickup
acute with a nice micro overdrive

Most: his humbuker not too heavy, good handle
The least: look a little odd

Kawataz's review (This content has been automatically translated from French)

The handle is a rgal, thin and fast, like Ibanez has them.
No problem for the high notes.
As prcdement signal, the handle tends to fall when playing seated.
For my part, I find it easy to get a good sound, whatever the microphone, and the phase inverter offers further possibilities.

It is ideally suited to the style of music that I play (Rock Celtic morning of country, hard rock, blues, funk and others).
My amp as a Vox AD60VT, I have more choices than the sound).
It happened to get very clear sound as fat. (See style of music deficits above)

I use it since 1983 and just stand refrettage.
The look is a bit weird and timber marking easily.
It is a gift so the report is very good ... qualitprix
There is no question that I claim, so ....