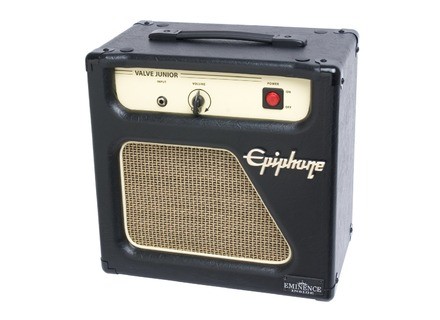 Epiphone Valve Junior
5
I've been playing guitar for several years now, solely out of solid state combos -- Peavey Rage 158, Crate GX40C and a little unit I built (Second hobby: Electronics). I play only for myself, not in a band.

I purchased the Valve Jr. from Musicians Friend on sale for $99.00 -- and shipping was free. I thought that it would be a nice way to get into true tube sound and a great price. Since I don't play in a band it was perfect for in home playing.

I love the units look and feel -- it's got a classic styling and the covering is well put together.

Now to the best part - the sound. I was thinking that for $100 I was going to get something mediocre. Boy was I wrong. It's crystal clear until you crank it up, then you get a nice warm distortion reminicent of many old tube heads -- but of course not quite mimicking any. For bedroom/practice use I would say that this is a great unit. You could probably even do a small club with it and larger ones if they'll mike you. That isn't in my realm of experience though.

My sole complaint about this unit is that it doesn't have a headphone out jack. It's got three jacks in the back for 3 different ohm loads but no phones jack on the front =(.

This is built solidly -- It'll stand the test of time if you don't neglect it. There were no blemishes or scratches when I got it.

All in all this is a terrific purchase for the price, especially if you don't already own a tube head. After I buy a bass amp I'll probably purchase a second Valve Jr. as a backup -- or the next "size" up.

Epiphone Valve Junior
3
This is a 5 watt tube amp without any frills like tone or gain, just simply a power switch, volume knob, and a 1/4" standard guitar input. Any tone shaping can be done with effects equipment, but not in a loop, prior to the gain/volume stage.

This amp really opens up the louder you put it. There really aren't any choices, such as through using different settings, to get a good sound because there are no amplifier settings: simply on/off and whatever volume level you dial up. That being said, this amplifier sounds pretty good, especially in a bedroom or for a home studio environment.

There is a lot of versatility in that there isn't anything to fiddle with this amp - just whatever effects equipment that gets set up in front of it. So, this amplifier is capable of producing many different tones that all encompass the type of "tube warmth" that us guitar players seem to strive for. This could be the clean kind of tones, the ultra-clean tones used in New Wave (like the Cars) or lots of heavy metal distortion from a pedal for thrash and hardcore music. The higher the volume knob is set, the more the tube is driven, the warmer the tone. Fortunately, with only 5 watts, it doesn't take a whole lot of volume to start driving the tube.

This is a neat little practice amp, even if it is kind of expensive since it doesn't come with any type of tone shaping controls at all. Still, nice, clean tones are easily delivered from this amp, making it a great combo for someone who just "has to have" tube warmth in their bedroom rig. I ended up passing on this amp, but did go back and forth for a long time, agonizing over whether I'd pick one up or not. I've played a couple different ones for a couple different hours; I would suggest being able to play one the one that you intend to purchase, because they don't all sound the same.
Did you find this review helpful?yesno
»

It's a very simple amplifier with only a single volume control. So changing the sound depends a great deal on what you're putting into it. That said the tone of the amp does change quite drastically depending on where the volume knob is set.

The best thing about this amplifier is that it's a great for modifying and that's where it becomes a great amp. When I bought this amp it had already been modified to have 8 and 16 ohm outputs using a different output transformer, a gain switch which is done by bypassing a resistor and a tweed tone control. I have since modified the amp further myself adding a switch to switch between triode and pentode modes of the power tube. This modification allows you to drop the output by around half which allows you to crank the amp to cause it to "break up" without it being too loud.

I use this amp with a Squier Duo-Sonic guitar and a Electro Harmonix Big Muff effects pedal. Clean tones is not where this amp really shines, if you're looking for chiming cleans then a Fender Champion 600 would probably better choice for a small valve amp. When distorted this amplifier can sound great, I like setting the amplifier to a clean tone at around a quarter volume and then using the Big Muff to push the amp into overdrive by setting the volume at full and the sustain at zero, this is my favorite rhythm guitar tone using this set up. The amp also sounds great when it's set to a slightly distorted tone and then with the Big Muff set as a fuzz by pushing the sustain to near full and then just getting the volume to unity.

My favorite thing about this amp is it's simplicity to modify to open up it's possibilities for use, even the simplest modifications such as a tone knob allow the amp to be much more versatile and useable in more situations. Another thing I like about this amp is how it reacts to the different overdrive and distortion pedals that I've used with it.

I personally think that this amp is quite limited when left stock as without the triode/pentode mod getting distorted tones out of the amp will mean quite a high amount of volume which I expect would be too loud for people to use at home for practice.
Did you find this review helpful?yesno
»

ddn's review (This content has been automatically translated from French)" Very powerful. How? I SAID VERY POWERFUL."

Epiphone Valve Junior
5
A good little old all-tube 5 watt house. Finally, in principle home. Entrance, on / off, volume, HP and HP outputs an 8 "Eminence Crown in (finally mine, because I believe that there are other types of HP).
The quality is quite good, the Tolex is nice, handles are plastoc this is damage, the grillcloth is successful, the overall design is great. I would have preferred a small logo € rather than maousse "Epiphone" on the side of the amp but good.

The manual is 452145 pages, read all if we understand nothing.
The setup is really very complicated, it is a big problem on this amp. Necessary to connect the guitar in it. Not easy. According to press On. According to wait a bit because it is seen as lamps need it heats. It's really hard in 5 minutes to play. After must adjust the volume and it's complicated to explain to everyone that yes, it is a 5 watts and yes, it is a portable home and yes, it is normal for a small room the volume is unbearable past quarter of the race knob before the amp starts to warm up the sound a bit.
Joking aside this is a real problem the power of this amp in any case to use it is supposed to be: I play in stereo in my home studio or in very small rooms usually art galleries . No way to turn up the volume beyond the fourth race of the knob without everyone out ...
The sound is good apart from that wealth is surprisingly serious for an amp of this size, it does not vibrate, it does not sound boxy at all the sound is full and very pleasant.

Uh for my style of music this amp is frustrating. The sound, perfect. I, who have years of habit of Fender Champion 600 is another world: the sound of the trunk, scale, fat - I still love my 600, it will also end I'll play quadraphonic when I found a way to do it.
But there are so powerful that I have to put very gently and I do not profit as much as I would like heat lamps.
I play a Jaguar Japanese so not what is bigger, hefty as microphones, mostly clear sound with reverb / delay (s) and even for me this is what STRONG. How? The gentleman IL TE SAYS YOU PLAY TOO HIGH. Ah, good.

I like this amp. I have two.
It's cheap, it's beautiful, it sounds good, it is quite light and not too big.
But really in really lacks a switch 0.5w/1w/5w as a Vox or a Bugera.

Did you find this review helpful?yesno
»
Read the 20 user reviews on the Epiphone Valve Junior »