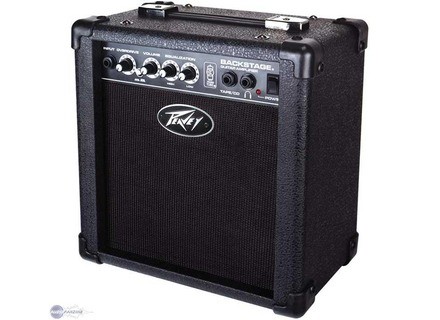 View all offers for Peavey Backstage »

Peavey Backstage
4
I have the Peavey Backstage amp for a very long time, I have had a 75watt Peaveyr since the old version and they are very heavy guitar amps, during my first two years learning how to play I used this and it is a massive bang for the buck. When I hear the sound that comes out of this amp I am blown away, I just sit and play and get memorized by the sound and before I know it 5 hours have passed.


It comes with tons of effects for any playing style, on a scale of 1-10 for how much distortion, this amp gets a solid 8, the distortion is mad at lower levels but when you start cranking this powerhouse amp up it gets really intense, sometimes so intense you can't even hear your mids or treble anymore, that is a big downside to this amp, the sound starts to get muddy at high levels, I wouldn't use it for gigging for this reason, the other con to this is the sound can sound sort of digital like it isn't natural distortion, to bassy at times.


I was never able to get the tone I have been craving for, mad house rocking distortion with clarity, the speaker just cuts out the mids and makes it sound to distorted. The good news is that this only happens at ridiculous sound levels, like gigging, if you are using this as a practice amp than it will suit you perfectly.

Overall, it is worth every penny , the verdict is still out on which electric guitar to buy. So if your guitar is good and you match it with this amp you are going to be shocked by the sound that comes out of it. You will love this amp, it has been out for a while now and a lot of stores online are selling them pretty cheap!

Peavey Backstage
4
Peavey has this thing called the transtube technology. They have a patent on the idea and have been marketing it now for a while. Essentially what it is, is they have this hybrid style analog circuit matched with a solid state circuit. There still is no tubes in the amp, but it gives the feel and sound more closer to the feel and sound of real tubes overdriving.

This amp is not one of the high gain sounds we are most familiar with when it comes to the sound of Peavey. This is a clean channel amp with a second switchable channel that gets mildly dirty. You aren't going to get any high gain tones from this amp.

Another great feature to this amp in that you can plug you cd player or ipod into it and jam along to your favorite songs. This is a great feature that really adds to the dynamics of this amp.

This is a practice amp and at new these units come in at around $60. That is a steal of a price. They are portable and light. You can also plug in your headphones and jam quietly in your home or office.

I would recommend this amp to anyone who is on a tight budget ad you would like a good little practice and that won't break the budget. It is a price that is hard to beat for such a valuable skill building guitar tool.

I don't think it could be easier...

The clean channel sounds very good and the amp is loud considering it has only 10 watts!

I don't like the amp's overdrive at all, the sound is very heavy.

To get a metal sound (less heavy), I bought a distortion pedal and the sound got better.

I bought this amp a year ago when I started to play and I find it was a good purchase.

As a summary, it's a good amp to learn electric guitar unless you want a heavy metal sound.
Did you find this review helpful?yesno
»

champikas's review (This content has been automatically translated from French)

Configuration is very simple with Equalization high, low obtebir can sound very clear as could have contained the manual to be more explanatory

I play rock and it suits me perfectly I play an Ibanez GAX 30 ac juice the amp if I play a gibson zack wilde ac ac micro amp vox emg on any lamp.
He did not sustain and carément 1 crisatllin not bad
I love the clear sound with overdrive against his poor ...

Did you find this review helpful?yesno
»
Read the 8 user reviews on the Peavey Backstage »