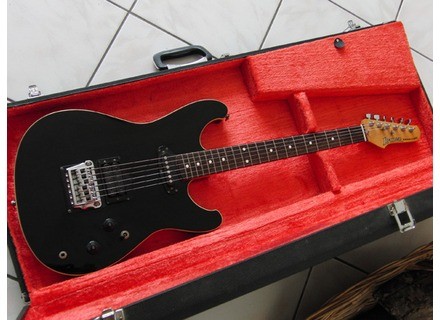 RS335, Other Shape Guitar from Ibanez.

All user reviews for the Ibanez RS335

Ibanez RS335
4
This is one of the super old, vintage Ibanez guitars. We have a small collection of these at the shop, and they're pretty surprising considering the price that they go for. The guitar is actually based off of the Roadstar series. It has a basswood body, a maple neck with a rosewood fretboard, 21 frets with dot inlays, a bizarre tremolo, HS configuration, one volume, one tone and a three way switch.

The guitar is put together decently, but it's no exquisite piece by any means. The neck joint on this has a slight gap to it, and it can potentially hinder tone in a negative way. The frets on this were pretty worn, but that was to be expected for a guitar that's well over 20 years. The nut also needed to be recut as it was worn pretty heavily around the wound strings. This is a pretty common issue that occurs in older guitars. The bridge on this is really bizarre, and I'm not sure what they were thinking when they made it. It works decently, but it just feels really odd. I think they were almost going for an old school HS Charvel vibe with this guitar.

The sound is decent, but it wasn't something that'll blow your socks off. The bridge pickup in this was an old school DiMarzio Super Distortion. This was a pickup installed by the previous owner, and it actually works out pretty nicely. They're super fat and it's very powerful. If you ever wanted that old school hard rock/metal tone, this is your pickup. It's awesome in single pickup guitars as it's fat enough to work for both rhythms and solos. The neck pickup in this was the stock single, and it sounded very thin. On top of that, it was super low output, so it couldn't compete once you used the middle position. It would probably fair better if you replaced the neck pickup with a nice single coil humbucker.

It's hard to beat this guitar for the price. They go really cheap on the used market, but they're great gigging guitars. They also sound pretty good. Just expect to spend some time doing a proper set up on it and possibly doing a refret/fixing the nut.
Did you find this review helpful?yesno
Cookies help us improve performance, enhance user experience and deliver our services. By using our services, you agree to our use of cookies. Find out more.