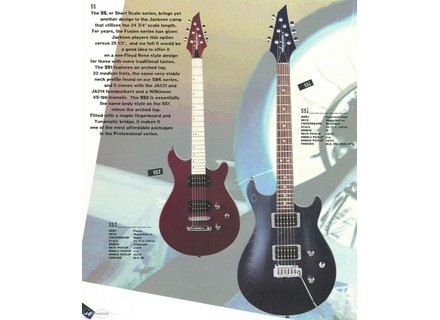 SS2, Other Shape Guitar from Jackson in the Professional series.

Jackson SS2
4
This is the hard tail version of the slightly odd looking SS series Jackson. They're basically like short scale super strats but with modified horns. The 2 designates that this is a hard tail version instead of the normal wilkinson style version. This also has a different body wood. The guitar features a poplar body with a maple neck, a maple fretboard with 22 frets, dot inlays, a hard tail bridge, two humbuckers, one volume, one tone and a three way switch.

The guitar was put together decently, and it was pretty much standard for what you'd find around this time. One thing worth noting is that this fretboard was crazy dirty. Whoever played this before must have made it his number one for quite awhile. The frets on these were worn, but they were recently leveled, so they weren't too bad. The neck joint on this particular guitar wasn't too bad. The hard tail bridge on this had some pitting going on, and I assume the last guy's sweat was pretty acidic. The saddles had some grooves in them, and I also noticed that they were reversed compared to stock to allow for some more room for intonation, so I almost wonder if he kept this guitar down tuned.

The pickups were swapped with some EMGs, and I'm not sure they really suited this guitar. The poplar body and maple neck combined with the EMGs gave it a unique tone, but I tend to prefer EMGs in either mahogany or alder guitars. The EMG 81 in the bridge had a lot of cut to it, and it can do tight metal rhythms with ease. It works great for heavy metal, but it's not the best for other genres out there. It tends to sound a bit sterile at times. The EMG 81 in the neck was also very bright and "shreddy." If you're looking for tons of compression and strong pick attack, this is the pickup you want. I tend to prefer the 85 in the neck as it's a bit thicker and smoother.

I prefer the maple fretboard on this model, but that's about it. The rest of the guitar, I tend to prefer the SS1 instead. The Wilkinson and ash body suits me quite a bit more than the hard tail and poplar on this guitar. If you're going to buy one, be sure you don't mind taking a loss on it as they're hard to sell.
Did you find this review helpful?yesno
»