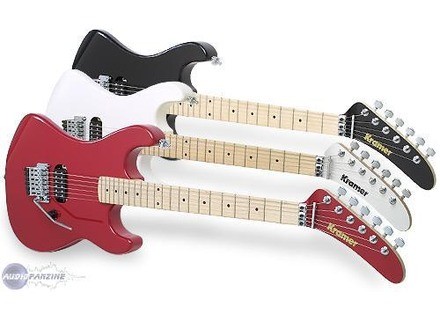 1984 REISSUE, Other Shape Guitar from Kramer.

Kramer 1984 REISSUE
4
The Kramer 1984 was a recent model attempt by the revived Kramer company to go back to their roots and build a guitar like they had in the eighties. The 1984 is the first link in the chain, having been based on the guitar played by a certain rock star known for painting red, white, and black stripes on his guitars. It's got an alder body, a maple neck and fretboard, matching headstock, 22 frets with dot inlays, a Floyd Rose tremolo system and a Gibson 84T humbucker wired to a single volume control. They were available in black, white, red and a base coat meaning you could paint whatever you wanted on it. The guitars were built in the USA.

The design is a lot like the Barettas that I know and love, so the same sort of comments apply. The guitar is well designed and sits excellently on the body. The neck has a great profile that's not too thin nor too thick overall, and the finish on the neck feels great too. The weight is good too, not as light as some Ibanez RGs but certainly in the range for a good superstrat. The upper fret access is very similar to the other Kramers I've played - really quite good, but not as stellar as some of the Ibanez or Jackson guitars that were designed for flawless upper fret access.

Getting a good sound out of this guitar is pretty simple. It's wired just like the old Barettas so the same sort of simple motto applies. It has a very pure and woody sort of quality that works very well for hard rock rhythms or some EVH esque leads.

The guitar has the typical Kramer raunchy tone in spades, which is exactly what I'd want from a guitar like this. It doesn't really do cleans or lower gain tones all that well, but when it's put through a killer gained out amp like a juiced up Marshall it just comes alive with harmonics and overtones that take me right back to 1984. The rhythm tones are quite thick and meaty for a locking trem equipped ax and it works very well for both palm muted stuff or open sustained chords. The lead tones out of this guitar are exactly like the old Kramers to my ears. The Gibson 84T humbucker is great for coaxing out killer tapped runs or some fast alternate picking. It has great clarity on all strings and definitely sounds great for that 80s lead thing.

All in all I think the Kramer 1984 is a great reissue of the classic Kramers. Though it's pretty simple, it sounds and feels the part, plus it has quality craftsmanship. They can be picked up for about $700 used which is a decent deal overall. It'd be nice if Kramer reintroduced the USA line of guitars since they were doing so well with it before the Music Yo side of things shut down.
Did you find this review helpful?yesno
»

Other Kramer other Shape Guitars