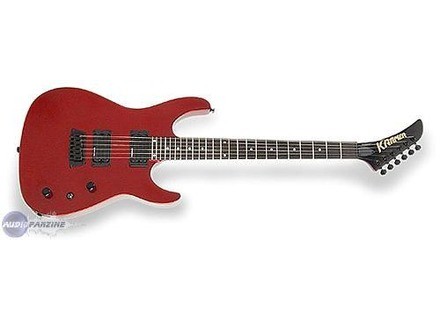 lam_da's review (This content has been automatically translated from French)

Kramer Baretta FX404SX
5
A beautiful Korean North American Alder.
Channel crossing and fixed bridge (tune-o-matic I think) to sustain the patient.
We can adjust the volume and tone. There is a push-pull.
rosewood fingerboard, a rosewood quality, it remained 6 years with no maintenance and has not cracked.
The handle is flat and broad.
Grover Skull in the class!
Painting ... way wall of a murder scene on a white background with yellow spots of fresh blood and oxidized hehe!

The strings are close to the frets and access to acute is really great!
I regret one thing: the handle is painted and it does not slide easily on it.

Light scratches, a superb cutout for the belly, and then to find her, it's simple as all non-scratch?

I did not spend enough time on the beast, but it has enormous potential!
Let's say for the bulk of the death that kills, it is for. The output level is very high.

So, she plays a lot of non-bridge position split.
Neck position: I do not use very little. Its too big, it is great to make plans and Jazzy Bluesy by setting the tone.

The clean sounds, it's okay, I did not plugged into any lamp, I think I will one day.
Its power is its strength and its weakness. She is the great big sound, I set two-tone below, and send the microphones severe! For clean sounds, not bad, not the top, but it can be solved with Eq.

With microphones softer, I can turn the beast into a machine versatility. She has a hell of sustain, it would be a shame not to take advantage of this potential. There is not that much of cross-handled scraper.

<Shift>
I installed microphones Swineshead pickups that I highly recommend just for the quality and to drive the point home, an excellently value for money, not to mention that it is hand made ...
Condor sleeve Xbucker in easel.
The Condor is a very soft micro, I can finally have beautiful sounds clear enough when we round down the tone. It is quite without lens too be. Allows great games in the lead with a typed Slash.
The Xbucker allows me to have perhaps more potato than Quad-Rails. Hard to say, but the highs are present without being garish. If you like ultra heavy distortion accompanied by palm-mute, this mic is for you.

All that to say that the violin for Kramer to install microphones good qualities that will exploit the beast. With all that, I sustain from hell!

I leave an opinion, but ... are not found in the Kramer France

I'll raise the note one point because it's worth it!
</ Shift>

It's been two years that I have, I have not played too much. But I love it.
For more than € 500 is a very good quality / price ratio, given the quality of construction materials. There's even a cage faradet!

I will put a good photo if I can later.
Did you find this review helpful?yesno
»

Other Kramer other Shape Guitars