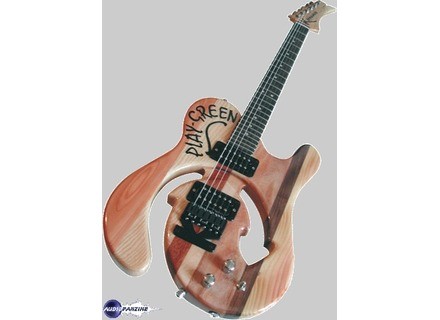 arsouille22's review (This content has been automatically translated from French)

Kronodale Musical Instruments Play green
2
Well, first of all, it is a machine supposed to come home.
I say supposed, because as I will detail later, the finishes are not always at the height of the label "Made in France".

A handle 24 cases bolted to a body composed of several species of wood.

Two humbuckers, "stamped" Kronodale via a sticker that can be found regularly on the guitar ...

A fixed bridge with six adjustable saddles. The appearance is not the hair, but the settings and screws relating thereto are in good order. Good point on that side.

Electronics question is not simple:

la, it is another pair (handle!)

The handle, well, it baffled me at first because he has a rather flat affect, it is still quite thick. Looks like a bracket with rounded corners. Fortunately, the paint is on top. A real ice rink, which compensates for the thickness.

However, the frets ... bof ... they were quick to scratch the inside of the hand ... the one is a contrast to the quality of the varnish.

Access to acute, the hair, if one ignores the saw blade is that the frets!

In terms of ergonomics, this guitar is cool. A reasonable weight, presumably to "hollow" shape and wood used. The thin body makes you feel pretty good with this guitar, better than a Telecaster which is drawn from the general form.

for her .. Les Paul Standard 2 doubles. we like it or not. the level is pretty high because when we attack a little pick, "it sends!"

There, the sounds is not necessarily objective, it depends on the amp, tastes, etc. ...

but clear as saturated, we get enough to make the James Blunt or Metallica ...

9a sounds obviously not as Folk, or as the ESP modèele signature, but it is quite versatile.

I recently. However, for a number of guitars on hand, and having really tested (I shop) I would say it is very unbalanced in terms of quality.

the look (we like it or not, but as I have a great love story with wood ...)
the knight sets
polish the shaft

ben ... finishes. oO the metal parts appear to have been painted a bomb without prior preparation ...
These same pieces appear to have been screwed into force, without first hole, screws or "wrong" ... Certainly, it does not hinder the game or the performance of the guitar but hey, when you pretend to make quality, original and made in insurance, we try to do better than the lower range of Asian productions ...
What annoys me, without preventing the guitar be fair, it is the "plate" of the handle, which supports the 4 screws connecting body / neck ... it is wrong ...

Certainly, it does not see himself in a condition of use, but it leaves an idea of ​​the care given to the violin ... and I&#39;m afraid I got lucky on that side because the guitar is very playable without needing to go through the box maker - billing!

I understand that production in France is more expensive than in Asia, even with shipping and customs costs, but frankly, if I had put nearly 1000 € in a new guitar, or even 800 € (you know the difference between list price and price stores that are doing the flock) to be closer to reality, I certainly do not put in a guitar of this quality.

frankly there are much better at this price. I&#39;m sorry to say this, because like any good franchouillardn, I&#39;m a bit chauvinist ...
And French have guitars, serial or luthier, there&#39;s no photo, they have absolutely nothing to do with as this one.

If you find the same and especially that you can at least see it before buying, you can estimate the price that you put inside.
But frankly, the picture via buy an ad, it&#39;s just playing Russian roulette ...

If I will ever have a choice? ... at my price, yes, given that I have in my hands and that I collect ... it makes a small French rigolotte has an affordable rate.
If I had purchased in-store labor costs ... enh, well no, I will not get it purchased the proposed tariff.

Well done, I do not say, but as it stands, it does not deserve.

For value for money, if I am using the new, I am not average.