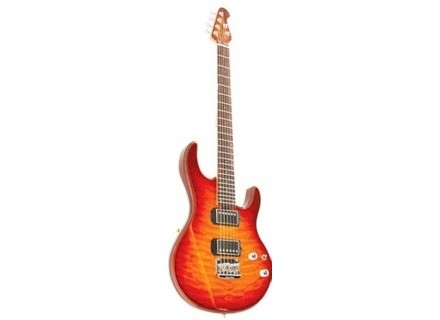 Silhouette 20th Anniversary, Other Shape Guitar from Music Man in the Silhouette series.

leadguitar45's review (This content has been automatically translated from French)" Great guitar!"

I love this race. Bigger than my Luke (as indeed I prefer) but actually the handle kind I love hair!.
Very nice, falls very well in the hand, the thumb can go over smoothly.
And besides, it's beautiful!

This guitar has the grain!
Purchased Cygnus, I think it was not used much and was poorly resolved.
Once set (I like the floating tremolo personal) it sounds and takes the Deal! A pretty bold grain, a big lead!
Surprising because the guitar projected little vacuum (not enough played I think).
The cleans can go round (neck pickup) to slamming (intermediate position).
The Crunch or lead can go from blues to heavy rock or hard.
I changed the bridge pickup (too vintage for me) by a SSH + (with chrome cover to meet the look) and frankly .... AC disconnects!! Big sound (or hard rock, not metal) insured!

Once set properly, a great guitar.
She is beautiful, very comfortable, very enjoyable to play, and it sounds!

As my other 2 guitars, she'll stay home.

Teuj's review (This content has been automatically translated from French)

Music Man Silhouette 20th Anniversary
5
Guitar "Made in USA" directly from the Custom Shop in San Luis Obispo. Very limited range of approximately 400 copies (according to Guitar World mag).
The 20th anniversary boasts an alder body complete with a table in maple veneer with a three-ply. In the center of the body under the pickups, is a block of mahogany (a unique feature of this model only). It gives the guitar a tone similar to a guitar whose body is mahogany, with no extra weight.
The pickups are two custom humbuckers with DiMarzio instead of the humbucking configuration / single-coil/humbucking the standard silhouette and a three-position selector switch replaces the five-position.
The handle has a 24-fret slim and rounded, almost a sense of unvarnished wood and for good reason, instead of a polyester finish, the handle has been oiled and waxed to main.Un Another new feature is a significant patented compensated nut allows adjustment of the accuracy sembleble enough to that proposed by the Buzz Feiten system. Vibrato is a music man. It is crossing over to dd'apporter sustain.La head is asymmetric with its mechanical varnish features the logo "20 th anniversary". Amber sunburst finish is beautiful. The key is on my rosewood modéle.Au first glance one can guess an exceptional guitar.

The handle turns out fantastic. With a relatively flat radius (10 I think) it allows all the tricks possible. The string action is relatively low in all areas of the handle. The ergonomic design allows ease of play and access to acute incroyables.La correctness is exemplary.
I thought the sleeves were Vigier who matched me best (they are still terrible) but now I must take my hat off to the maker of Music Man: that of the goldsmith. The markers of volume and tone and the selector are properly placed and easily accessible.

Cete guitar can play everything that exists. Sound as jazzy riff in metal cutting well, nothing escapes him! Whatever the micro config used, the sound appears accurate with incredible sustain for a guitar neck screwed. The sounds are still very hot with a beautiful grain.

I did that for two weeks but it is clear that the guys on Music Man did a tremendous job. Basically, we have the perfect marriage between a vintage guitar and modern construction technologies. Try to have a lot of high-end guitars before I make this big pleasure, I must say that I "never, ever" had the same feelings of pleasure ETDE gameplay. There, I fell in love with this guitar (the notice must be felt). If you find one, throw you over for a try. The value for money is completely justified and a scratch like this we have to keep living.
Music Man now knows a new afficionnado. A thank you to Anthony Grang Guitarshop in Talence for allowing me to purchase this jewelry violin.