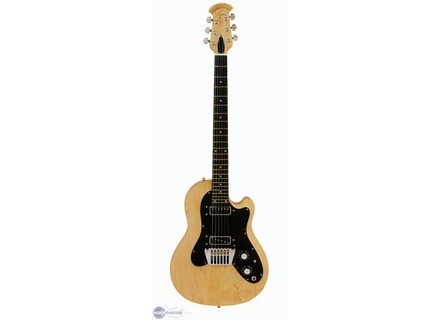 Viper, Other Shape Guitar from Ovation.

Ovation Viper
4
My guitar is a Pawn shop find. They are USA made guitars, but the hardware is made in Germany (Schaller).

The guitar looked a bit sad when I got it... missing 2 tuning machines, and looked well under-loved. At some point, the guitar had been re-finished... and they didn't do a bad job... the refinish was long ago, since there were plenty of knicks and scratches to account for the age.

I disassembled it all, buffed it all out, cleaned the pots, and gave it a full tune up. I sourced original parts to put it back how it belonged.

That said, it's a very solid guitar. Sonics are a Telecaster on steroids. The fretboard is a bit on the flat side... and Fender guys who try it get fussed up about that.

If you see one for under 500$ US, you won't get burned providing condition is good. The pickguards are prone to cracking at the input jack, so watch for that. Otherwise, give it a whirl. It's a well made guitar that should hold up.

This is one of those "Sleeper" guitars that you can get for less $$.. but delivers great performance.
Did you find this review helpful?yesno
»

Ovation Viper
4
I have been playing guitar and bass since I was 12 (I'm almost 30 now). I learned a few things from my dad, who has been playing both for most of his life, but much of my education came from spending hours upon hours playing along with my dad's collection of Beatles and Beach Boys LPs. I've been blessed with a good ear, so picking things up is really easy for me, and is mainly how I learn. My main influences, besides the Beatles, are Wilco, Pedro the Lion, The Byrds, Sufjan Stevens, the Beach Boys, and Kings of Convenience. If we're talking specifically about bass, my influences would also have to include Ben Folds Five.

I've also played drums now for about 10 years or so. Ringo Starr is my single biggest influence in this arena. He is the drummer's drummer, and never let his ego get in the way of a great song.

I'm currently in between bands as I'm finishing college. But I've been in several different bands, each playing a different style of music.

My dad actually got two Vipers at a pawnshop in Northern Minnesota. He got the two guitars and a case for $150.

One of my favourite things about the guitar is that it's not popular. I saw a picture one of the guys from Abba playing one, but other than that I've never seen anyone, celebrity or otherwise, playing one publicly.

The neck has 24 frets, which is really nice if you're into playing high on the neck. If you're primarily a rhythm player, you may not like the longer neck, but it never bothered me.

The tone you get from this instrument is fantastic. The two single-coil pickups provide a great sound not unlike a Telecaster. The magnets in the bridge pickup are even angled like a Tele.

And speaking of pickups, both are mounted on the pickguard, which covers most of the front of the guitar. Removing the pickguard will allow access to all the electronics.

Vipers are fairly light and well-balanced guitars. It's a slab-body design like an SG or Tele, or even a Gretsch Corvette if you remember those.

There isn't much about the guitar I don't like. One tough spot is the lack of available repair parts. Fortunately, I have a friend who is an absolute wizard with guitars and guitar electronics, but I'm sure most people don't fare so well. If your pickups happen to conk out, you might be able to replace it with a mini-humbucker (if a simple re-wiring job won't do the trick).

Also, I would move the strap button to the back of the neck base, like on the SG, but the chrome plate prevents that from being done easily. Given the angle of the upper bout curve, a non-locking strap can sometimes slip off easily, but it's not a major point of contention.

Like I said, the guitars are a slab-bodied single-cutaway design with two pickups (the Viper II has three). The wood and materials are high-quality, and workmanship is excellent. Two large knobs provide volume and tone control, and pickup switching is done by a small three-position switch similar to the one on Gibson models. The 1/4-inch jack is on the front facing out. The headstock has the trademark Ovation style and logo, with off-set tuning pegs installed three per side.

You will probably only see this guitar in a pawnshop or second-hand music store like Music-Go-Round. Some can be found on eBay. If you happen to see one of these, you would do well to buy it. Mine is definitely one of the nicest that I've ever played.

Melodieu's review (This content has been automatically translated from French)

Ovation Viper
5
Made in Germany, with 24 frets, 2 single pickups, a bridge suitable for viper. Volume control and tone sensitive and do a lot of difference! http://esmail.free.fr/instruments.htm [img]

She is very versatile in its clear! its a very rare find!
It also provides a natural sound of the 70s and 80s!
Adjusting lens and medium, and round.

It's been 10 years since I use it.
Shame it is no longer listed. It is very rare to find.

The Duck's review (This content has been automatically translated from French)

Ovation Viper
5
Made in the USA, 24 frets, 3 single coil pickups brand Ovation (he is the Viper III). Ovation bridge specifiers. Rglage volume (1) of Tone (1) and 3 switches for each pickup slectionner sparment, which provides, unlike a stratum, all possible combinations, and which, too, cut all the microphones.

Handle very strait (caractristique own guitars ovation), but very pleasant and very easy to use, fast enough. BMOL small, the narrowness of the neck makes it difficult to agree on the top games of round, by which pleasure cons for bars.

CASC is sumptuous to acute (two octaves UNESCORecords on the handle).

The ergonomics are excellent, but this guitar is as heavy as a Gibson Les Paul, which is saying something.

Very easy to adjust and, thanks to its numerous possibilities of choosing pickups, you get excellent sound. This guitar is extremely versatile with sounds very Fender Stratocaster oriented architecture (3 single coils requires) and is perfect for funky sounds, country and pop 70s, 80. Thanks to good qualities in overdrive, it can also hook the sound of Deep Purple (Blackmore PERIOD).

Being given to my prdilection sounds blues, pop, rock and roll and rock, this guitar fills me. Plugs into an amp Peavey VK212, makes it extremely well in the sound of the amp clean, but also in the lead channel sounds.

I availing oneself of this guitar now for 27 years and I do not think I ever spares me as she does once a purchase of heart and that love affair continues.

Normment I enjoy the ease of the handle and the CASC Aiges (quoiqu'tant mostly rhythm guitar, this aspect is less important). Other caractristique I have never found on any other guitar that I like: the three switches to activate or disable the microphone separately.

When buying, I test a Rickenbacker 325 and a Fender Stratocaster, and if I have, from time to time, nostalgia for Rick, I have never regretted my choice. In the era I was looking for a versatile guitar and Ovation largely silent over the other two that level.

Having bought this guitar in 1981 to 600 (value 1981) instead of 1200 (liquidation and bankruptcy of the store for Minimizing of 50% over the stock) is, recess, a quality report incomparable and unbeatable price.

I would do without hesitating, the same choice, even if today we find in world production of guitars equally, if not more, effective.

This guitar is very rare dj finish 2 single coils, but according to my research in version 3 single coils only 19 models were sold in Europe does, making it, given its qualities manufacturing, an invaluable tool in the Argus.

See all 42 photos of Ovation Viper »

Other Ovation other Shape Guitars