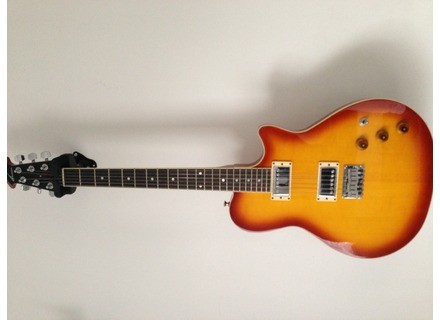 VXT, Other Shape Guitar from Ovation.

Ovation VXT
5
Fully manufactured in the U.S. in the workshops of Ovation is a hybrid one with Fishman piezo under the bridge for electro-acoustic sounds and two Seymour Duncan humbucker for light electric sounds, frankly grunch or saturated.
Small sounding closed for the sustain without the feedback.
In addition to the usual adjustments of electrical, a potentiometer to spend micro piezo humbucker or mix the two.
The integrated amplifier piezo has obviously a small compressor and the sound is already very clear limit slamming.
With the Y cable, you can send the sound of two mics on two separate lines.

Channel width 43mm and easy access to acute. A well regulated action allows a smooth and fast Thurs An acoustic, the difference from a real dreadnough is mainly due to pulling lower (10/46).

I play on a POD XT Live directly connected to the table. I use all kinds of sounds, from very light with only acoustic piezo some clean sounds by mixing the two microphones, sound just a dirty and heavy distortion with humbuckers.
It took me some time to find the right settings between Line 6 and the guitar but in the end, I am delighted with the result crrément.
Both repeat in concert, I can spend an acoustic ride a pop-rock sound even metalheads in 2 seconds.

I came from a Crafter HLS hybrid that has a piezo and a lipstick. It is the latter that was not nearly enough for good electric sounds, that's why I was trying to go upmarket.
With the VXT was a real power and true grit of an electro-acoustic. It also has the quality of an Ovation entirely handmade in the U.S.. The agreement does not move a muscle, the action is short without curling. In short, a high-end guitar whose price is justified.
This is a guitar that unfortunately no longer produced. The opportunities are very rare in France. I bought mine in the U.S. (without trying it) and must inevitably pay 5% customs fee on the price of the guitar and the harbor and, of course, VAT on all .
If it again? Rather than 2 times!

Other Ovation other Shape Guitars