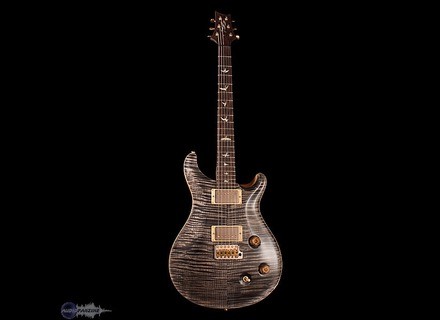 emmanuel0866's review (This content has been automatically translated from French)

PRS Modern Eagle - Charcoal
5
Guitar made in the USA.
Lutherie absolutely beautiful. perfectly tuned instrument delivered and controlled by PRS (liuvrée in 9 / 42).
The handle is very soft and relatively thick.
Comment on the pickups RP: these are microphones high output, they are extremely sensitive and are configurable (volume, tone, push / pul, three easily selectable positions, more so that the rotor fitted custom).
The model I own has a tremolo.
The guitar tune almost never does, even after a period of inactivity.

This instrument is a joy to look and toucher.La guitar is very versatile and is suitable for long hours without effort.
However, I find it inspires a relative sensitivity in the game: it's probably a quality in itself but this may not be suitable for all styles of music which claims PRS access.
I invite to view the interviews given by Paul Reed himself describes his bias in the design and manufacture of guitar: in essence, it creates instruments radically medium, super versatile, and thus lack a bit of "character" .

Honestly, I do not have enough skill or practice to exploit the sonic possibilities offered by this instrument.
I think it is particularly aimed at professionals looking for a studio tool super reliable and versatile, which can operate in single or double with a biblical simplicity.

I often plug the + in a Bogner Shiva, and whether serious or distortion, low or high volume, the guitar is never aggressive. We always get the impression that it is in the compromise ...

The feeling is the same with effects pedals (distortion RAT, tremolo) but I used sparingly.

I am fortunate to own this guitar for 8 months.
Play as an instrument of this quality is both a source of motivation for work and a pure pleasure.

However, given its price (around 7000 euros!), I think it may be more appropriate to offer two beautiful guitars more typical: the Modern Eagle is not an LP or a Start .. . it is between two and finally rest a little bit of his hunger for his extraordinary versatility is also reflected by a small lack of character. In a sense, this guitar may be too much higher ...

That said, it should be noted that PRS is probably the major international luthier takes the greatest care to the instruments he makes, and therefore customers music fans we are and who are often victims of some their passion.