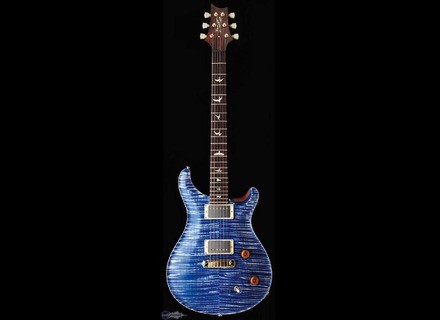 hocusspocusss's review (This content has been automatically translated from French)

PRS Modern Eagle - Faded Blue Jean
5
The Modern Eagle is a MADE IN USA by master luthiers in the Private Stock PRS.
In other words, the finishes are sublime.

It's a set neck with 22 frets inserts "birds" in abalone. the buttons and the handle are Brazilian Rosewood.

2 humbucker pickups with PRS PR Stoptail and a fixed bridge.
Also available with the floyd tremolo in PRS Custom 24 identical.

Settings are not one bit simpler, and yet ...
One volume, one tone, 3-position selector.
The tone knob is push / pull splitter and allows the microphones in the three positions.

The finish is sublime, rather than varnish, PRS has opted for an ultra-thin satin to the touch, which is a treat.
This gives a staggering range of sounds in sounds ranging from warm and fat with more crystalline.

There is nothing to complain about. try to adopt it.

It is true that I am connected PRS (I also have a Custom 24 Artist Package), I feared a duplicate in the sounds. But it has nothing to do.

The handle is a delight, the microphones are incisive, the harmonics out of themselves. I feel like I just play better.

This scraper is a look that is unusual, a touchdown and an extremely pleasant sound or should I say, sounds unusual. It is true that it is far from an entry level.

I play on a mesa with a TriAxis Eventide Eclipse multi-effects and in a mesa 2:50 power amp. All this comes on a mesa 4x12 cabinet with Vintage 30.

I also tried to live more simply, on a mesa F50 home. I love it.

It is clear that returned a Marshall Valvestate hybrid would be a complete mess.

I did that for 15 days, but it promises a bright future.

It's really the guitar I was most surprised by its versatility and sound.