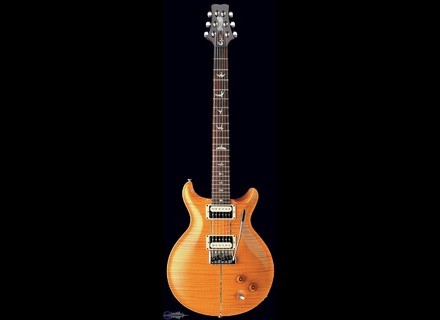 PRS Santana II
5
Bought on Ebay for $3900.00, 2002 Santana yellow. I bought this after buying a Santana III and finding out this series of guitars are the "Holy Grail".

I'm scared to dent, ding or scratch it!
The stock Santana II pickups are a bit edgy for me. They are harsh sounding when compared to the my Santana III so I swapped them for new Santana III pickups direct from PRS. It was the right choice!

I received it "dead mint". There isn't a single scratch, dent or mark on the entire guitar. It came absolutely flawless as inspected with a lighted magnifying loop. The setup was perfect. The fretwork is the best I've ever seen. The wood used is beyond beautiful. The edge of the guitar has the natural wood binding where the flame maple top was not dyed on the edge that meets the mahogony body back. Very nice and classy.

I absolutely love my Santana III, especially the pickups. The II with the III version pickups is the best combination there is yet. My Santana III is now lent to a friend and he is in love with it.
The number of different sounds that are available with this guitar/pickup combination is excellent for rock, blues, jazz. Add a metal zone and you can be a shredmaster-metalhead.

PRS Santana II
5
PRS USA, late in the limit of private stock, handle end 24 cases, zebra pickups PRS specially dedicated, beautiful woods, beautiful and understated decor, a volume knob and a tone knob, mechanical PRS AD (change of rope under 10s ), signed by Carlos himself. The bag provided is of high class.
We immediately feel that this guitar was designed especially for beauty and efficiency.

The ergonomics are fantastic Mechanical terribly effective, guitar little or no out of tune. Handle end without access to acute problem until Section 24 incredible accuracy. very well balanced and a minimal weight.
The sound is a killer: after owning several hundred guitars but not least, I have to make a comparison Strato57 a tely62 335 and 64.
Only with volume and tone, it goes through all the sounds of the three monuments together. Previously, I used the tone sparingly. With Santana II, this button becomes essential. We pass crystal clear sound like strat to saturated convaicants sounds. Certainly it attack unless Les Paul but the sound is not drooling in serious: it's very precise, this studio is a treat.

I play electric blues, rock or variétoche and I feel that this guitar is a top. I use the guitar with tube amps: Cornford Harlequin and road house, Orange AD5, Fender Champ 1982 Elmwood Modena60), a ZT lunchbox, or a T-Rex SpinDoctor live sound. The machine makes it sound any system.
It goes to loud sounds, light it approaches the old Gretch, saturated no effect is the Gibson but very accurate.

I use it for five years. and I'm not ready to get rid of. This is simply the best guitar I've played by far, this quality is found mainly in the studio. On stage, the machine not only sounds like hell but her look is amazing.
Nothing is thrown away. Only downside: as I'm a little wrapped, this guitar looks tiny, barely bigger than a SG, but I became lazy to carry heavier and large instruments.
We record the quality / price ratio even if it is very expensive, the quality is such that this report we do not care. If you found a used (attention to the full range of U.S. Santana, it does not all have the same charisma) JUMPS OVER EYES CLOSED!