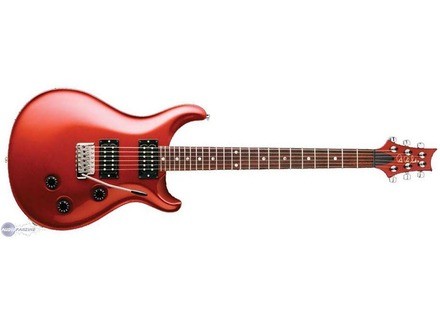 Standard 24, Other Shape Guitar from PRS.

All user reviews for the PRS Standard 24

heads on fire's review"Good guitar, if you can find one cheap"

This guitar is very easy to play and access all frets. The 5 way rotary switch is a neat feature, but that not everyone likes.

The tremolo is very smooth, and can take quite the whammy bar abuse, and the locking tuners are quite stable, for the most part. My one gripe about the guitar does have to do with the tuners, however. The tuners on this particular guitar are the PRS Phase I tuners, which were later "phased out" (sorry for the pun there) in favor of the newer Phase II. The Phase I tuners loo cool, with the "wing" lock, but it is very hard to lock down the high E string with them in the manner that PRS recommends. Since PRS introduced the newer tuners, this problem has been addressed.

The sounds are where this guitar shines. Acoustically, it is very resonant and loud. It has a sound character reminiscent of 60s Gibson SG guitars, with a nice sustain and low-mid depth to it. The 5 way rotary is a great feature, allowing some split-coil Strat and Tele-style sounds. I know a lot of guys don't like the rotary, and I can understand why - it's nothing you could look at and get a strong visual cue as to what setting you're on, but this was never a problem for me.

This is a solid product for PRS. It is too bad they aren't made anymore. The guitar has subtle, understated look, which may be the reason it was discontinued - PRS buyers tend to emphasize the gorgeous flame maples and bird inlays and luscious finishes. But this guitar is fantastic for someone that can find one on the second-hand market for relatively cheap.
Did you find this review helpful?yesno
Cookies help us improve performance, enhance user experience and deliver our services. By using our services, you agree to our use of cookies. Find out more.