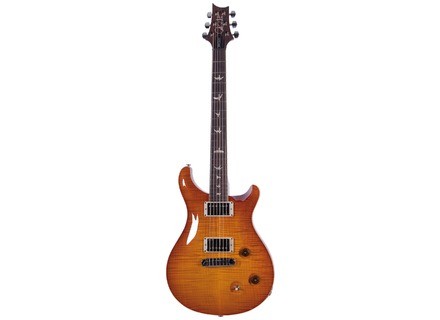 McCarty, Other Shape Guitar from PRS.

PRS McCarty
5
Guitar Center, East Brunswick, New Jersey. Paid $2600. I bought this guitar because I was looking for a guitar that was versatile enough to play an entire show without changing instruments (barring a string break).

This guitar is VERY versatile and sounds unbelievable. The humbucker sounds are tremendous, and the single coil sounds are very good. I bought one with an East Indian Rosewood Neck. If you decide on a McCarty, I HIGHLY recommend you look into one with this neck. The playability of all PRS's is great, but with this neck, it's unspeakable! Finally, the tone is outstanding. Dark, rich, and complex. However, this guitar, though awesome, is not for everyone. See below.

I have one very minor complaint: no locking tuners. Not that we buy guitars for their tuners, but they would have been nice.

Now, though I only have one complaint, I do have two major caveats. Make sure you understand the following before you buy this awesome (and very expensive) guitar. First, if you want a Les Paul or a Strat, get one. The humbucker sound on a McCarty is fatter than other double cutaway guitars, but it doesn't even approach the fatness of a Les Paul. The single coil sounds are very nice, but not "twangy" like a strat. Nothing does a Les Paul and Strat sounds better than Les Pauls and Strats. With that said, when you want to get "similar" sounds out of one guitar, this one can do it. Second, this guitar is very strong in the mids. Yes, the highs are sweet and the lows are smooth, but when your playing chords, its big on the mids. So if you're the type that likes playing with a scooped-mid sound, this guitar is not for you. Try a Custom 22 or 24 (with and without the trem system) instead. The McCarty is a great rock guitar, and it can do some of the heavier stuff if you ask it to. But if the heavy stuff is your thing, move on.

It's a PRS... construction and quality are nothing short of perfect. The set-up performed at the factory is better than any tech I know could ever do.

The McCarty is very versatile. It can come close to Les Paul and Strat sounds. But what makes this guitar worth the money is what you don't hear about enough-- the PRS sound. It's got its own sonic character that is dark, rich, and complex. If you don't like the mids, try a Custom 22 with a tail stop. To overly generalize, the McCarty is more vinatage sounding and the Custom 22 is more modern sounding. Good Luck!

PRS McCarty
4
it was a 2500$ guitar, bought it for 2000, not bad of a deal, at first i bought a store show model, but was not too happy with the condition it was in after i took it home and closely examined it under special lighting, so i brought it back and they transfered another one to guitar center, and took it home.

i like the sound of the guitar, its very mellow, almost jazzy. i love the look of this guitar, i got a transparant whale blue finish, it looks magnificent under flourecent lights. the best part about the guitar is its tone, and the weight of it compared to a les paul. the guitar stays in tune almost perfectly.

i was not very fond of the neck, the neck is too skinny for some of the different vigorous ways i play my guitar, like heavy thrash and such.

the guitar is very well made, the finish is great. but i felt that the frets going have been better, maybe its just my guitar.

go check it out. its tone can be matched up with a les paul. yet, the playability cannot be compared to a les paul custom

PRS McCarty
5
Guitar center, (today) Paid 1700, (that incudes tax) and they were selling it for 2,299. They're pretty flexible if you bother em enough.

I like everything about this, feels great, sounds great, looks great. Great.

The only thing I don't like is that it's wide. It makes it kinda tough to mute strings on the go. I can get over it

This guitar totally rules, sounds like an acoustic when it's not plugged in!

PRS McCarty
5
I acquired this McCarty by purchasing it from a guitar store in Edmonton, Alberta Canada for $2,800(Canadian). I bought it because it was my favourite of all the guitars that I tried.

My McCarty is the coolest looking guitar that anyone could imagine. The Gold Top is very unique in that unlike many goldtop guitars it has a more glassy luster to it rather than a metallic one. Because of this combined with the wicked carved maple top it looks incredible in a different way no matter what direction, angle or distance you look at it from. However, not only does it look cool, it sounds coolest. Unlike many modern guitars(e.g. ESP, Ibanez, Jackson) the McCarty's sound is free of the annoying squeeks, scratches, buzzes and screeches that seem to swarm to guitars with ultra hi-gain pickups. The type of guitars which are more commonly used by Metal guitarists, which is what I am. I believe that the McCarty Model is the ultimate combination of Les Paul heavyness and sustain and Stratocaster precision and brightness. It has just enough highs and mids to let the higher notes ring through loud and clear but it also has a heaping pile of smooth, sustaining, yet crushing low end. The main thing that sets the McCarty far ahead of the screeching, squeeking buzzing pack of imports is its smooth yet clear tone which is very contradictory to the usual harsh open coil sound that the imports tend to deliver.

My only real complaints about this amazing guitar are that 1)it's action is very difficult to get just right and 2)it doesn't have locking tuners for tuning stability after dropping down to the depths of metal tuning.

The construction and quality of the instrument were impecable, however there was one itsy bitsy flaw. When I removed the truss rod cover to perform some adkjustments I discoverd a small gob of wood shavings stuck together by some dried up headstock finisher. This catastrophe however, was solved with the flick of finger. Aside from that it was flawless.

Overall the PRS McCarty is well worth the fairly hefty price tag. It is the best guitar I have ever played thus far in my life, and I doubt it will be surpassed anytime soon.

This review was originally published on http://www.musicgearreview.com
Did you find this review helpful?yesno
»
Read the 9 user reviews on the PRS McCarty »