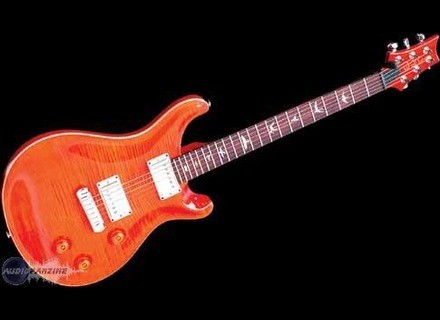 Custom 22, Other Shape Guitar from PRS.

View all offers for PRS Custom 22 »

PRS Custom 22
5
The Paul Reed Smith Custom 22 Ten-Top is one of PRS's flagship guitars from the 1990's. It features a mahogany body with a carved figured maple top, twenty-two frets, a twenty five inch scale, and Mahogany neck with a Rosewood fretboard. Made in the USA, and solid everywhere. It features the HFS pickup in the neck/treble position, and the Vintage Bass pickup in the bridge/bass position. It has a 5-way blade switch and a tone and volume knob.

The guitar is an absolute dream to play. Every aspect of it is so perfect and so well thought out and planned for. It sounds and feels just incredible. Very sweet and quick action, awesome tones and really easy to get lost in. Really comfortable to stand or sit. Well dressed frets, comfortable bridge design, and nice shape. Really tempting to just sit and play it all day long.

The Custom 22 absolutely sings no matter what you ask it to do. It can go from chunky bass tones to twangier treble tones and all kinds of places in between. It gets heavy too, and sounds great on hot lead tones. I even played extreme drone metal with it! Also sounds great at my local jazz club through an old Fender Twin Reverb. Really responsive to the effects and amps you use on it, and a very unique sound.

Overall I am blessed by having this guitar in my life. I got a GREAT deal on it, and I'll never give it up! It's basically my dream guitar, but then again so is everything PRS makes. If this were stolen I would track down that thief and do unspeakable things to him! This guitar is a must have everywhere and there are days where I barely even put it down.
Did you find this review helpful?yesno
»

By far the best thing about this instrument, and the factor that grabbed me, was the beautiful action and ease of playing. Licks that i could only sort of play my Strat or Les Paul came out flawlessly on the PRS' fingerboard. It is also a beautifully made instrument, and is a work of art in itself. The Dragon II pickups are produce red-hot distortion, and distinctively smooth and full clean tones.

The only trouble with this instrument, is I don't believe the pickups produce enough twang for some styles of music, and it doesnt sound as good in low gain settings that are ideal for blues playing.

This instrument is constructed flawlessly. It is beautiful to look at, and it feels very solid in your hands. The weight is perfect. It will only sound better with age, and will last a lifetime. The only problem I had was one of the screws that held the bass pickup to the plastic docking piece came loose soon i after i purchased the guitar. However, I tightened it, and have had no problems since.

Overall one of the best guitars available. While versatile in it's own right, it is perhaps best suited for rock playing, leaving the jazz to a softer sounding intrument, and the blues to a twangier instrument. I would consider this guitar the best middle-ground instrument available.

PRS Custom 22
5
I bought this guitar from guitar center for about 1700 U.S.$ new. It is by far the best guitar I have ever played. Before buying it I read all of the reviews, praising this guitar, but I remained skeptical. After playing it, I realized that it was definitly worth the price I paid and more. The sound quality is amazing and the feel of the fingerboard is great too.

Everything. I have it in black cherry and it looks great. It is the best guitar I have ever played.

PRS Custom 22
5
Richmond Music Center in Richmond VA for $2100. I was looking for my first high-end guitar for a LONG, LONG time. I was considering PRS, Gibson, Strat, etc., etc. I play a wide variety of music, so the ability to get different tones out of the guitar was very important. A friend of mine swore by PRS guitars, so I decided to focus on them. I spent several days in the shop playing all of the different types of PRS - singlecut, custom 22 vs 24, ce 22 vs 24, standard 22 vs 24. I finally came to the conclusion that I liked a set neck, as well as the Dragon II pickups featured in the 22 fret versions of many PRS models. So, I then played every Custom 22 in the shop that had a tremelo (which I initially wanted), but none jumped out at me. Then, the sales guy pulled down this Custom 22 with a stop-tail. No joke, I hit one chord and knew this was "THE ONE." No question - perfect, thank you, done.

Everything. The workmanship is amazing. In terms of sheer beauty, the guitar is perfect - natural maple top, mahogany body and neck, bird inlays, etc. In terms of tone, it is unbelievable. I am able to get a nice thick Les Paul, as well as a clean glassy Strat sound out of this guitar. It features 2 Dragon II pickups with coil tap which allows me to access the single coils. The wide fat neck is very comfortable in my hand and the new tuners that are now offered on PRS guitars are very easy to use. It is set up with 9's at the shop. I usually play with 10's, but I plan to continue with 9's on the PRS. Why mess with a good thing?

Nothing. Some people may say price, and yes PRS guitars are expensive. However, new PRS's start at $1300 (Standard 22's), which is what you'll pay for a high-end Strat. Les Paul's will run you $2,000 and up. I'd say, dollar for dollar it is a great value because of the ability to get a large variety of tone out of one instrument.

PRS guitars are not for everyone. However, if you are like me and enjoy playing many different styles of music, a PRS might do the trick for you. Keep in mind, PRS guitars vary from model to model, and within a model line itself, so play them ALL. You may be suprised at what you like. Ideally, get a blindfold and have the salesperson, or a friend, hand you one guitar after another. Once you find THE GUITAR, you'll know it, and you may be suprised that what you're holding isn't at all what you expected.

This review was originally published on http://www.musicgearreview.com
Did you find this review helpful?yesno
»
Read the 9 user reviews on the PRS Custom 22 »

[NAMM] The PRS Custom 22 guitar is back

Published on 01/22/13
Paul Reed Smith reintroduces in his 2013 catalog the classic Custom 22 electric guitar, with some new features.