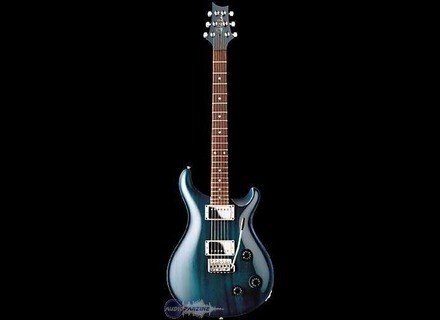 Standard 22, Other Shape Guitar from PRS.

PRS Standard 22
5
Paul Reed Smith guitars are an exceptional boutique guitar for the working musician and not the budget musician. All they they do make some guitars that are conveniently price they're not up to the standards and specs that you would see from many of the guitars that got Paul Reed Smith to where it's at today. They have a great looking a great field to them with their chunky thick max and there are mix between a Gibson Les Paul and Fender Stratocaster guitar. They usually come with a nice finger quilted maple top on top of a mahogany wood in a mahogany neck with the rosewood fretboard. They generally have humbuckers installed and the pick up slots so you get a good chunky sick rhythm tone.

These guitars are pretty easy a play and if you have a good amplifier to go along with this guitar and you'll be set. Keep the necks are pretty big and thick so if you have big hands at a work for you but if you have smaller hands sometimes this won't be ideal. You might be looking for a Ibanez thickness of the neck rather than this guitar.

This guitar features to home buckers and you have a volume and control knob as well as a pickup selector. The scale length is a 22 scale length which is a one another shorter versions of their product line. It's a great overall guitar it's a great getting guitar and as a pretty decent sound if you're into the Gibson Les Paul sounded to Gibson overall sound primarily because it features mahogany wood throughout most of the construction of the guitar itself.

These guitar sound fantastic. If you playing through a Paul Reed Smith guitar amplifier because I guess they're voiced together to match each other perfectly. Generally the Paul Reed Smith guitar ants are a low to medium game so you're getting get a lot of notes separation clarity when he plays guitar through one of those in. The great overall sound and the high gain pickups will allow you to get a good hard rock and classic rock tone from grandpa fires. If you use in conjunction with the solid distortion or overdrive pedal you can get some great hard rock tones as well. I primarily like Paulie Smith guitars especially this one with a high gain amplifier. Just to use with a marshall or a Mesa boogie and you can get some great solid hard rock in the metal tones with this guitar. These guitars take drop tuning very well so don't be afraid to use that your discretion.


At new these guitars coming right around $2500 which is a pretty expensive price for guitar but then again this is for a touring professional and a professional guitarist list that time and knows exactly what they want. This is a great guitar for someone who's engaging musician and wants to put a great instrument or hands for recording and live purposes.

There is a nice variety of sounds available from the two humbuckers and 5-way rotary pick up switch and it is easy to get a nice array of tones.
The guitar has perfect balance and a great medium thick neck. Very comfortable standing or sitting.

I've got the action set at 3/64" all the way across the neck - it is a great and easy player!
My particular guitar is very light but packs huge tone!
The PRS Dragon I pickups are just outstanding. Some of the best I've played.

I use this guitar with custom built Peters amplifiers, which are kind of a cross between a Peavey 5150 and high gain Marshall/VHT with a little Boogie thrown in, a VHT Sig-X and an Egnater MOD 50. The amps were paired with an Avatar 4x12 that had Celestion G12h -30's and a Splawn 4x12 with Governor/ManOWar speaker combo, a Earcandy Buzzbomb 2x12 w/ Scholz speakers and a Mojotone 3x12 w/ Celestion CL-80's.

I usually go for a nice thick Jerry Cantrell AIC tone, to use with my modern rock/metal band. This guitar can get you any tone you want and good cleans. Suits my style of music perfectly.

I also use this guitar in a few cover bands that I've played in which includes songs from The Rolling Stones, Kings of Leon to RHCP, Poison and System of a Down. It does well with all styles.

Positions 2 and 4 on the rotary (single coil) do sound weaker than the other positions.

You will also have to watch the amount of bass you dial in on the amp because your tone may get bass heavy with this model.

If this guitar would have had stainless steel frets (which I use exclusively now) I would have kept it longer than the three years I did. I did think about having ss frets installed on it but I thought it might ruin the fabulous tone it had as it was. I also wanted to sell it without the Dragon I pickups (because I could have used them in other guitars) but no buyer wanted that option.

Overall this was a beast of a guitar (in a good way). Lightweight, sounded monstrous, the regular neck carve was a dream to play on.

Value for the used price was a great deal! Knowing what I know now I would have made the same choice every time with this guitar. It was my first PRS (of many) and it was the one I held onto the longest before getting spoiled by ss frets.

I have owned many guitars and had a number of years where I would buy, try and flip, which enabled me to have many guitars around to try out.
This PRS standard is ranked right up there with the best of them in overall satisfaction. This guitar has beat out Ibanez RG's, Charvel/Jackson's, Gibsons, TA's and PRS's that have been in my collection - and I was able to sell them off.

Only a lack of ss frets and shallow lower horn cutaway lower the overall score from 10 to 9.

laulec's review (This content has been automatically translated from French)" a cut above! try in a"

PRS Standard 22
mine is without vibrato, not to avoid the worst spring Resonnances (for large metal distos)

the handle is between the Les Paul and the 335 with a little more magic in comfort reminiscent of fluidity Ibanez (yes!)
the general sculpture is very reassuring, and very feminine, the set neck and overweight are very promising
in fact the impression is indescribable, it's like when you try a Porsche for the first time
c is clumsy, powerful and very fluid
to tell you the chords are always right even when you pull the handle
this guitar is organic! as stated in the previous opinion.
very sensual!

out of a Les Paul, the microphones are much more nearly accurate not necessarily more powerful than the lp
we will say more hifi with grain preservé which remains rough.
No sound is never unpleasant even at high levels, it even tenfold magnitude, c is monstrous.
for clean sounds ca n is not a strat but it may be the groin October 1 minute without blushing.
not without laughter can even make jazz with strings and amp and adequate scratch

3 months that I have it and my respect increases day by day
I used the head with a engl fireball and black baffle our warrior 2 * 12 coupled to a like Thiele
a faultless for entry-level!

Hadjy's review (This content has been automatically translated from French)

PRS Standard 22
5
Good for data sheet you have everything on the site! Of pure happiness!

The handle is very pleasant! End, high freights, fast, with access to acute tip top! The guitar is comparable to women in terms of its forms! It is exquisite! Average weight should know what you want when it comes to quality! And we get a sound of hell for all types of music very easily by playing with the tone and especially the 5-position microphones!

Personally I touch all styles of music (rock, metal, jazz, classical, funk, ..) even if I play in a punk band! I have a JCM 800 amp head with a double baffle 2x120W and sound, as I said .. SOUND is to go! It's simple you can do everything with perfect sound for each style! Jazz, punk, rock, metal, funk, bossa, ... Swallowing and delivers a dream!

Personally I have been since 2003 and I am crazy! I also have a layer of 75 and it is true that with his two guitars my heart does not know where to turn! The color of this guitar is beautiful! The wood is of great quality with a long sustain for the notes! In short nothing to say! I tried bcp guitar before, through the sg, les paul, lag and other and I must say that although they are excellent guitars, none of them gives me as much versatility as my prs! Ok the price is very expensive but I got it for € 1,500 to more than 1000km from home after having bargained for over 2 weeks so I do not care lol! With experience it is clear that I would do the same choice! Happiness at a price!